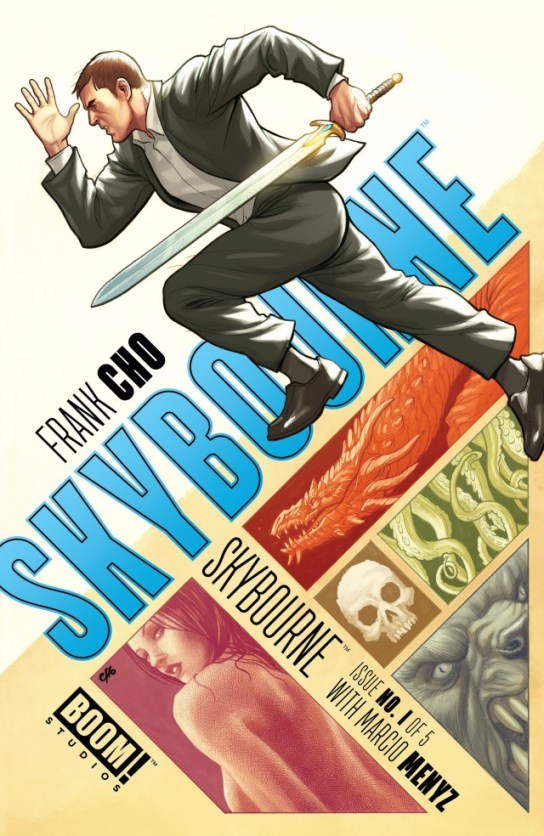 For the first time in a very long time Frank Cho has stepped away from the world of Marvel to craft his very own creator based story. Skybourne #1 reminds me of the pre credit scene of a James Bond film. We get a touch of story in an otherwise over extended next level action sequence. It works purely as piece of pure entertainment to get you in the right mind space for what is to come.

Beyond the fun were a few small fragments of story that have some promise, like the use of the sword Excalibur. Taking a mythoical element like that sword and placing it into the modern superhero world could be quite enjoyable.  Most of the story is laid out in the first page with the written description:

Lazarus, after his miraculous resurrection, fathered three children; Abraham Skybourne, Thomas Skybourne and Grace Skybourne.  Being the spawn of Lazarus brings about some pretty cool genes.  Each sibling is blessed with superhuman strength, impenetrable skin and immortality. This is their story

Shortly after that we see a man jump from a plan without the use of the parachute. No, this was not Captain America in Winter Solider. This was a man attempting suicide. An attempt that proved unsuccessful. Shortly after the focus shifts to another of Lazarus’s children Grace as she is attempting to buy a sword. Again we have another attempt that does not go as planned. Their refusal to give up the sword is what springboards us into the action extended sequence previous mentioned. Grace shows us just how powerful she by quickly taking apart the goons that foolishly stand in her way.

There is a sense of catharsis emanating from this series already. Cho has long been limited to the confines of Marvel and the level of violence they allow. Those limitations are hastily broken in this as we see Grace literally tear these guys apart. In one sequence she karate chops a man’s face in half like it was paper mache. On downside he is dead, but on the positive side he could be made into the first human Pez dispenser. This was like the little kid who is forced to sit still during a church sermon. The moment the final prayers are read and the congregation is dismissed he is running out the door yanking off his clip-on bow tie and cursing up a storm.

Outside of the use of violence Cho’s art has a new found life to it. His work at Marvel has been solid, but here he seems to simply be having fun. With an issue so predicated upon action you need an artist who can stage it properly so  it makes sense and is not overly redundant. Cho does just that. If you pay attention close enough on can hear the sound effects of bones crushing and cars crashing as you turn the pages.

While this was fun for a first issue, more meat needs to be added to the story bone for the series to work as a whole. That is especially true when you realize this is only a limited five part series. Personally I prefer a first issue that puts more focus on giving me characters I can care about. Here the character that intrigues me the most is a sword. Hopefully that will change moving forward.