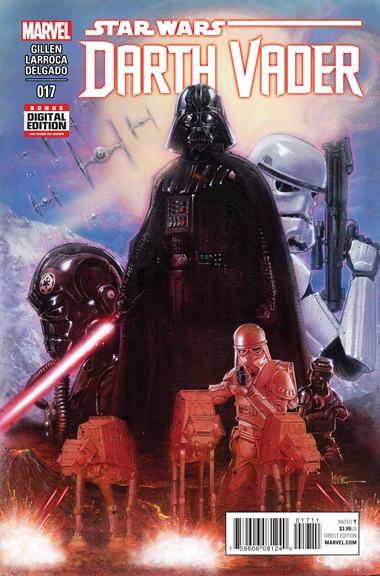 What am I rooting for? That’s the question that plagues my brain while reading the latest issue of Star Wars: Darth Vader. This issue continues the “The Shu-Torun War” as Vader is still trying to squash the rebellious Baron’s attempt to overthrow Queen Trios. Here we see them making their boldest move yet attacking the Queen and Darth Vader in a surprise maneuver on sacred ground, but of course their predetermined victory does not go quite as planned.

Kieron Gillen does give us plenty of moments to showcase the sheer power of Vader. Once again as he attacks an enemy vessel head on when escape appeared to be the only option. A new wrinkle is added though as we wonder if Vader’s overconfidence is getting the better of him. Although he and the twins where successful destroying the ship from the inside, he was only a few steps away from being consumed by molten lava.(I’m sure that brought back plenty of memories for him) Luckily it only singed the end of his flowing cap in his escape. An important moment as Vader’s ability to win wars over battles is questioned. With the amount of enemies stacking up it does appear Vader may be deeper in the hornets’ nest than even he realizes.

Ultimately though while there are enough enjoyable moments of Vader badassary that make this worth reading, I am left wondering why exactly this “War” truly matters. Sure the Empire needs this planet for supplies, but considering the time we are investing a global supply chain does not do much to garner mass interest. It comes off as nothing more than a forgettable transition not only for the character of Vader but the series as a whole.

It is becoming more and more evident that in order to this series to be successful it needs to establish solid side characters to compliment Darth Vader. Queen Trios has the potential to be that type of character, but at this point she is nothing more than a hallow figurehead. If Gillen can get me to invest in her success I can see caring more about the outcome of this global war beyond just hoping it ends.To answer my question from prior. What am i rooting for? At this point–absolutely nothing.

My worry is the hunt for Aphra will continue to overshadow the main arch until it becomes the one true focus. Hopefully this too does not get dragged out for too long, because after the Bounty Hunter search for Luke it is already getting quite redundant.