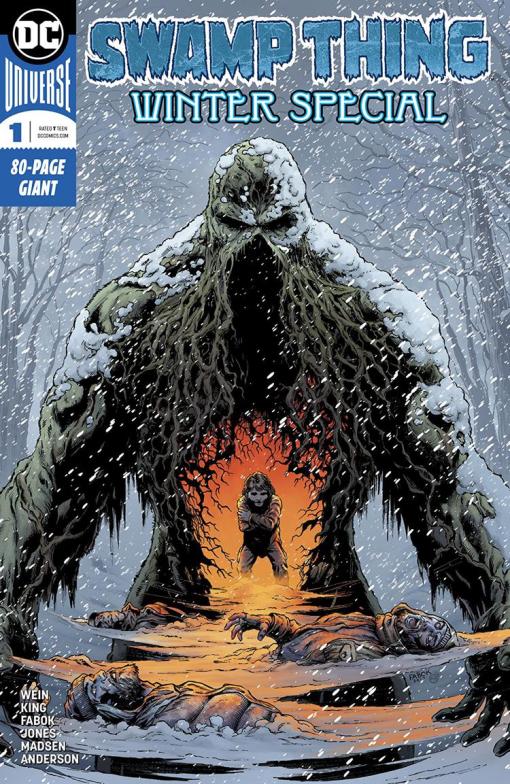 Well, that will take some time to get over. Swamp Thing Winter Special is comic storytelling at its best. One that celebrates a comic legend and the work he has gifted the world. Even without that attachment, the main story that is written by Tom King and penciled by Jason Fabok is a gorgeous work that reminds us monsters come in different shapes and sizes. Swamp Thing has had many legendary runs and comics and this issue stands with the best of them.

It all starts with the work of Jason Fabok. On a purely aesthetic level, he can fill a page with some truly pristine images.The detail is massively impressive from the minutia of the vines that cover Swamp Thing’s body to the frozen breath that slowly seeps out of mouths. Each bit makes you feel the cold deep down in the fiber of your being.  He was born to drawn Swamp Thing as he can capture his monstrous design but leave just enough room for his humanity to slip through. As the story progresses we get some close-ups of Swamp Thing’s face that portray a level of emotion I would not think possible for a creature of his ilk.

More importantly, the visual storytelling is next level. Starting with some opening pages of the green slowly being overtaken by pristine white snow. What begins as a tranquil moment morphs into a dangerous one as the high winds and bitter cold engulf the green in treacherous conditions. Weather so severe that no man nor beast could fully survive fills the air. Slowly a figure begins to appear in the distance. Eventually, his figure becomes clear enough we can make on who or what is braving this weather. Of course, it is our hero but on the page turn tension immediately begins to rise as Swamp Thing is not alone. In his arms he carries a young boy who appears near death’s door. 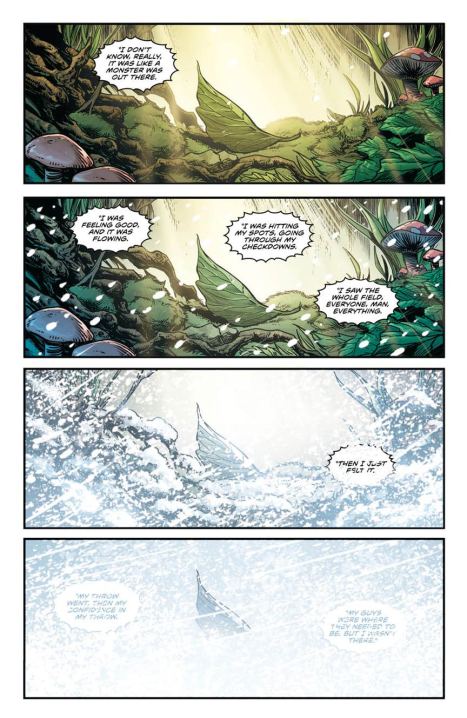 Within a few pages, the entire premise of this story is given without needing a word. Stakes are clearly set with no immediate answers to be found. Now it is not like Tom King did not do his fair share of the work either. Some may think a story about keeping a young boy alive is an easy win. You want people to care? Put some children in peril! I understand where that notion comes from as it is a trope that is often misused used due to lazy unmotivated writing. That is the opposite of what is happening here.

Here Swamp Thing is fighting against a force that has taken away the green. One that has made him and others lost to the point of dangerous confusion. In a hope to avoid spoiling the story what is happening is much more than that. This is a tale about monsters and how they reveal themselves to us and to one another. How we all carry monsters with us in some capacity. The allegorical implications for what is occurring are wide inviting for varied interpretations. Personally, I see it as how we can form bonds even with the worst part of ourselves. Parts that may do us great harm but due to that connection, it can be impossible to let go. Others may even disregard the monsters that can engulf us. Scoffing at those feelings as nothing more than excuses for failure. Ultimately it is vital to see through all the noise to understand who we really are.

I could see giving this to anyone who has ever suffered from any form of depression, mental illness, or addiction. Never does it feel like it is trying to teach a lesson. Rather provide a struggle that is so relatable. Outside of the thematic weight on a pure story sense it works as an emotional and harrowing journey for survival. The suspense is constant and the way makes you care about this main relationship gives the ending an enormous impact.

Anyone who has read a Tom King book before knows how his best skill is his structure. There is a rhythm to every panel and every page. It’s like hearing the world’s best orchestra where every instrument comes together to form a piece greater than itself. His love of nine-panel grids is well documented but here we see a major variation. There is as less of the singular nine panels and more five vertical panels. Obviously, both come from the same standard structure, but by using fewer panels the pace of the story is naturally heightened. Considering this is a race against time it heightens the tension that much more. 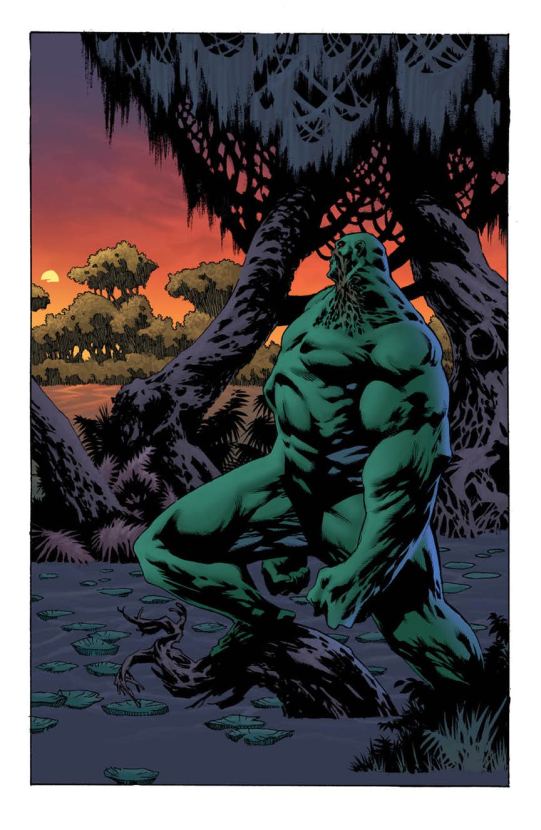 The page turn is also a piece of comic book making than be underutilized. Here it was used to great effect especially with some fantastic splash pages. Swamp Thing taking on a massive bear ended with a sickening thud. Easily the best was when the monster was finally revealed. A two page spread with just the right pinch of dialog. It encapsulates the impact of that moment without hitting you over the head with it.

It should also be pointed out that this special also includes the last Swamp Thing story written by Len Wein. I loved the choice of adding no dialog to those panels as the silence of that story speaks volumes. Representing both the man that was lost and the incredible work he has left us with. If you are the type of person that likes to better understand the creation of comics they also include Wein’s script for the story. Would also advise taking a moment to read Rebecca Taylor’s Editor’s Note. It’s a touching tribute that gives us a small glimpse of the man behind the monster.

They say that imitation is the sincerest form of flattery. Makes me wonder what is the sincerest form of respect. Whatever it may be both are represented in this issue. An homage to comic legends done by some of today’s best comic creators. It is more than just a great comic because the level of care makes it apparent the admiration these creators had for Bernie Wrightson and Len Wein goes beyond their work and to who there were as people. We may be only two months into the year but I find it unlikely we will get a better single issue than this.

5 Hair Hacks to Complete Your Cosplay