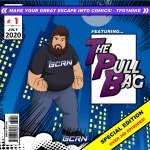 TFG1Mike gives you guys insights as to what will be happening inside The Pull Bag for the first annual MARVELOUS MARCH SPOTLIGHT! Spidey, Cap, Hulk, Wolvie, and Iron Man are the FIVE MARVEL Characters that we will be focussing the coverage on this year!  There has been SOME MARVEL Comics coverage inside The Pull Bag within the first year of the podcast. However it’s been spotty at best. I have ZERO objections to reading trades of characters I know and enjoy. However I’ve always enjoyed the MARVEL characters in animation more.

Here’s our Marvel Coverage so far in the first year of the podcast.

BEFORE We get to that… hear how it all began with Spada The Baltmatrix and I chatting about the end of Amazing in this Special GeekCast Radio Episode!

PLUS ALL  of PUNISHER MONTH!

The Pull Bag – Episode 42 – The Punisher: Year One

The Pull Bag – Episode 44 – The Punisher: Welcome Back, Frank

So we have had TWENTY-TWO MARVEL Comics eps outta I dunno how many total eps of The Pull Bag. That being said I have set side FIVE episodes here in 2014 covering SIX MARVEL Characters. I have ComicRevolt Dan, JT From Saskatoon, Ryan The UnEvenFlow, and Positively Nerdy Ryan Porter helping me out this year. The goal for MARVELOUS MARCH is to spotlight the characters and their one shot type of stories. my goal was to not have to read events that tie into multiple other books. We have picked somE amazing and some not so amazing trades to cover this first year of MARVELOUS MARCH! Here’s exactly what you’ll be getting. As I said….FIVE PODCASTS for SIX MARVEL characters, and as you can see from the very top of this post with the art Steve Megatron created… I wanted to have a Marvel Vs Capcom feel… with CHARACTER SELECT!!! This means each banner will highlight one of the five characters listed. And you might be asking WHY isn’t The Punisher on there? Well Episode 61.1 was something that Ryan The UnEVenFlow and I did FTER all four of the other podcasts were recorded.

So here how it breaks down:

That’s it for Marvelous March 2014! There will be many MARVELOUS MARCHES in the future. If you have any suggestions for one shot type of stories… with Wolverine, the X-Men (90s animated series style), or anything else shoot me an email feedback@geekcastradio.com. I hope that you will ENJOY MARVELOUS MARCH and tell your friends about the latest CORE podcast The Pull Bag here on The GeekCast Radio Network. Make your GREAT ESCAPE into Comics…. and UNLEASH THE GEEK IN YOU!!!