I am once again taking a look at This Week’s Best Comics. If you have not check out last week’s please do. You will also see me explain my approach when picking covers. I’m not simply looking for great images. I want to see story. So my picks may be different from others. 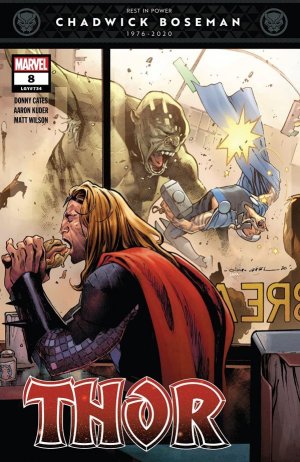 The last time I did this article I explained how having an effective comedic cover may be the hardest thing to pull off. To have one single image that is funny on its own while relating to the story at large is no small feat. Olivier Coipel’s cover for Thor #8 does just that. A classic gag that still works today. Our hero taking a break to enjoy a delicious meal while chaos happens in the background. Thor appears to be chomping down on a nice Reuben so I can understand where he is coming from. Love that this is also taking us back to one of my all-time favorites Thor runs when J. Michael Straczynski and Coipel ushered in a new age for Thor. Donny Cates knows his Marvel history so I have no doubt he was integral in getting Coipel to do this cover. 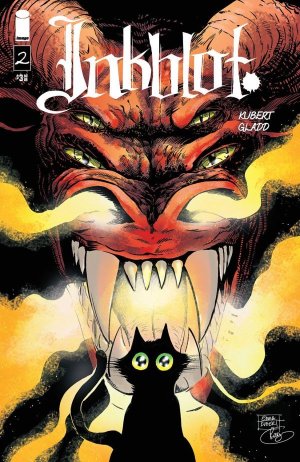 When in doubt add a cat.  Seems like a good rule of life, love, and of course comics. Inkblot #2 is testing that theory as much as anyone can. I love the juxtaposition of a wide-eyed cat in the foreground with a fanged beast in the background. That creature may look fierce but we all know under that cat’s cute demeanor there is a vicious monster underneath just waiting for the right reason to be unearthed. Also, it is a cat so it could be a wrong reason or no reason at all. Cats follow no rules except their own. Knowing it is a magical cat just adds to the possibilities. 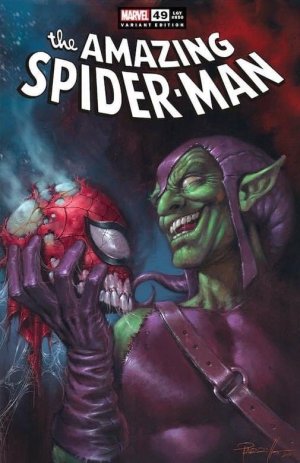 There are two big anniversary issues this week with Batman #100 and Amazing Spider-Man #850 so there is no shortage of variant covers to be found. Personally, the covers for Batman did not do much for me, and most of the Spider-Man covers had a similar effect. Lucio Parrillo’s cover was the one that stood out. Apparently, Shakespeare is hot right now as we will get to later. Having a homage the Hamlet skull scene may not the most original concept but it works. Small details like the spider webs coming off the skull of Green Goblin’s glove give it a little extra. Considering this is reflecting on one of comic’s oldest rivalries a tried and true reference also makes sense. 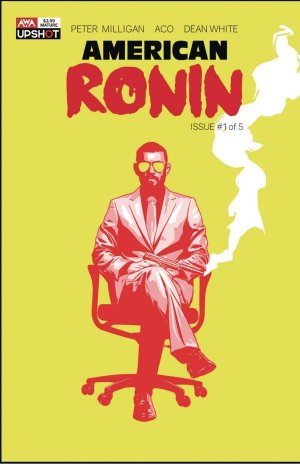 What jumps off the page with this cover is the color. That yellow pops off the page. Placing this on the shelves amongst other comics and it will operate like a highlighter drawing your eye in compared to the more dreary comics on the shelves. Using the yellow inside the sunglasses was another smart move. Pulls the entire cover together.  Who knew but sitting is pretty badass in the right context. This man may have just killed somewhere, yet there he is cool, calm, and collected as if he is waiting to attend his next Zoom conference call. You get a sense of who this character is before you open the book. For a brand new indie series that can go a long way tom making the entire book work. Every single piece of this cover serves a purpose. 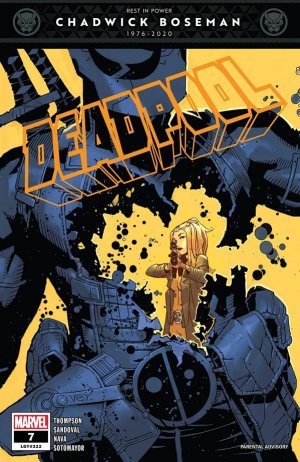 If I had one complaint about this cover it would be that the title placement does not completely work. Looks like Chris Bachalo had this fantastic idea for the cover but right when he completed it forgot he needed to put the name of the book someplace as well. By no means is it awful, just a minor flaw and an otherwise solid design. Similar to American Ronin the use of yellow is striking especially played against the grayed out Deadpool. Having a gun wound in the shape of a heart is right in line with the sense of humor you expect for Deadpool. 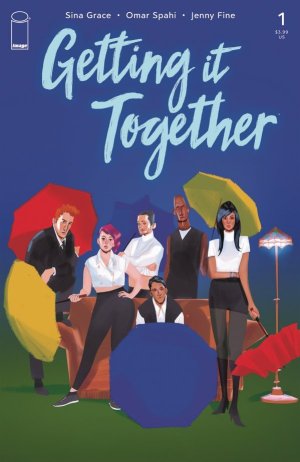 I do wonder if this cover makes smart financial sense. You have a cover of a brand new indie series by creators who are not super well established being an homage cover. Are you going to scare of those who are not fans of the Friends TV show? Now I could be wrong. Part of why this cover caught my eye was due to the fact that it is inspired by the opening credits of one of the 90’s biggest shows. It could also operate as a message that this will be exploring similar themes fo that show but in a more modern context. Considering the variant cover is an homage to an episode of Sex and the City this has a type of audience in mind and I am glad we are getting comics that appeal to more people as a whole. Ultimately that is why I feel it works as a cover like a good cover should it clues you into the type of story you are about to read. 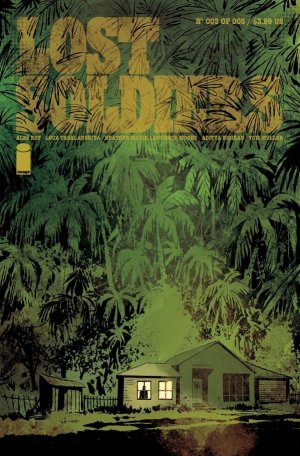 My first viewing of this cover and I did not notice much. A quick glimpse made me think this was nothing more than a building in the middle of the forest. Then I realized what was seamlessly happening within the image. Perhaps too seamlessly. Taking the environment of Vietnam and having it engulf a typical American home to clearly symbolize how soldiers bring the experience of war back with them to the homeland. You could argue that some coloring could make that element stand out more, however, that could be a bit more heavy-handed than intended. 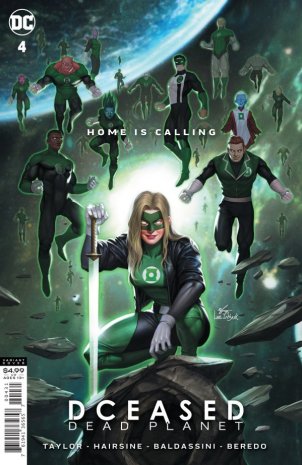 This was a bit of an easy win for me. I am a sucker for a good movie homage cover. DCeased has had a lot of these types of covers yet they keep finding ways to make it work. First, they started with horror films, and this time around more focused on science fiction films. This is a little bit like the snake eating its own tail as it references the Aquaman movie. If you are going to make that work using the Green Lantern core is the way to go. Of all the movie homage covers, this is not super high on the list. Does not quite hit the creativity level of what we saw artists do with Bitter Root earlier in the year. Still, it is fun and keeps it in the DC family. Now if only the movies would return the favor. 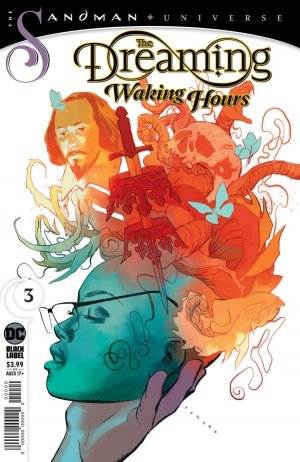 I said there was a Shakespeare theme and we are now back to it. This goes deeper than just homage as this series has actually been focusing on Shakespeare and the legends behind who really wrote his plays. Touching on theories about how he was able to create so many masterworks in such a short period of time. So this very much ties into that narrative along with the Dreaming world itself. Taking the classic sequence of holding the skull and upping the ante with nods to the history of Shakespeare and the comic itself. For those who have been following along with this book (you should it has been quite good), there even more to appreciate as it encompasses much of what has already transpired. 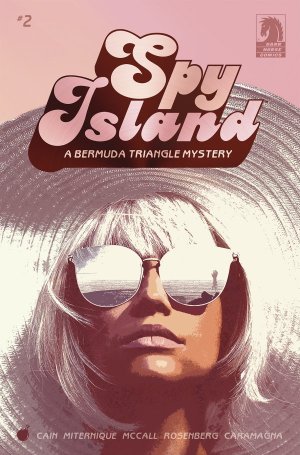 Spy Island #1 was one of my favorite covers of the year so my expectations were high for the follow-up. They delivered.  My goodness, those colors something else. The soft pink next to the shimmering silver is extra spicy. That alone is enough to garner one’s attention. As your eyes settle down to notice the pristine ocean in the woman’s glasses. Clearly, she is soaking up the sun on her beach day. Wait…is that an arm? Yes, of course, it is. What else would you expect on Spy Island? Not only is she soaking in the sun but she is also enjoying the struggles of her latest victim. She’s cold yet stylish. I bet she would get along well with the guy from American Ronin.