Time to look at this Week’s Best Comic Book Covers. Part of me wanted to start this article off with that classic axiom of judging books by their covers but it felt a bit too on the nose. Instead, let me explain to you what I feel makes a good cover.

To me just because an image is strong artistically does not mean it is a great cover. We are living in the age of variant covers most of which bare zero relation to the actual content of the comic inside.

Perhaps I am a bit old school but I look at a cover as part of the storytelling process. One that can set expectations of what you are about to read and the right creative teams know what to do with those expectations.

So you may be wondering why other covers people are proclaiming their love for did not make my list. It is not that I do not think they are impressive works of art, rather they do not accomplish what I feel is the main goal of any cover.

With that said let’s get to this week’s picks… 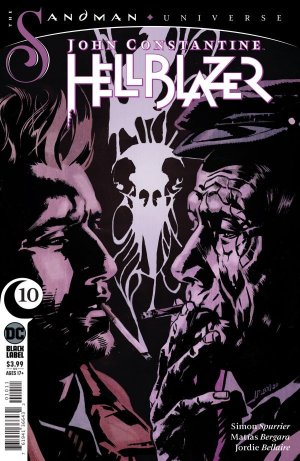 The year is not over yet but for my money, this version of Hellblazer has been the most consistent comic on the shelves this year in every way, which of course includes covers. I feel looking at this cover you can taste the cigarette smoke. Great characterization as the simple placement of the cigarette tells you so much about their demeanor. Despite literally being the same person the stark differences are clear and love the imagery of their smoke forming into a Rorschach esc cloud 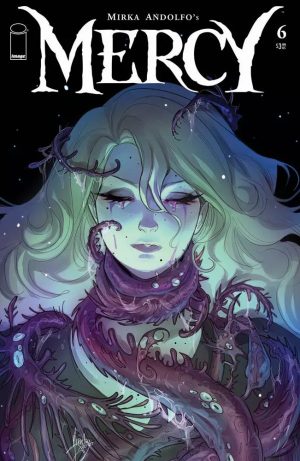 Mercy has not been a comic I have been keeping up with, which shows why covers can play a key role in garnering interest even later into their run. There is such a beautiful sadness to this image. As if this character is contemplating the inevitability of her own demise. The tears running down her face as her makeup begins to run with these monstrous tentacles apparently consuming her. Strong colors as well and considering Mirka Andologo not only does the cover but the interiors as well you know the art inside will be consistent with this image. 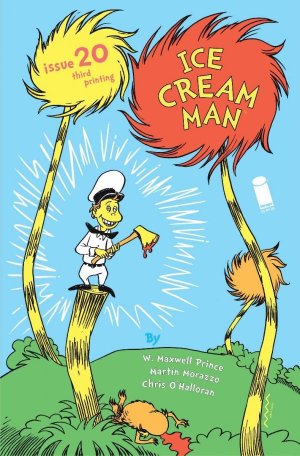 Who would have through the combination of Dr. Seuss, Ice Cream, and horror would be such a winning combination? The comic world has been going nuts for these Dr. Seuss variant covers from Ice Cream Man and I get it. This might be my favorite one mainly because if there is a Dr. Seuss story that could easily become a horror story it would be The Lorax. Unlike the other issues on this list, I have read this one so I know if you pick it up you will have the added benefit of reading a solid book as well, and don’t worry if you never read an issue before as it is super new reader-friendly. 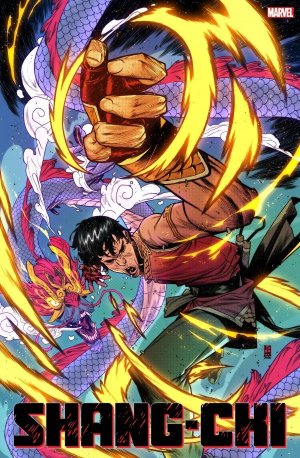 A new Marvel number one this week you so you know what that means? Tons and tons of variant covers. For me, the standout was this cover by Kim Jacinto. It stays true to the old comic adage of always keep things dynamic as this cover has a ton of energy. The unique angle and overextended figure design exhibit a sense of movement like you are dropping in the middle of an epic showdown between Shang Chi and a most dangerous foe. Plus one way to make any cover work is add a dragon. Dragons make good covers. You cannot argue with fact. 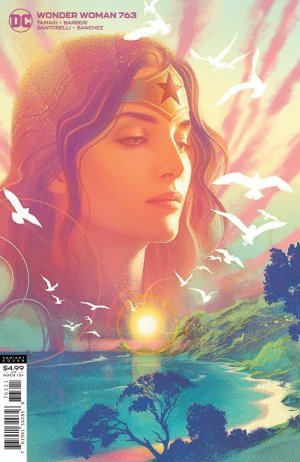 So some may argue this choice goes against my opening diatribe about what makes a good cover, and to be fair you would not be wrong. This does not do much to inform you about the ongoing story within the pages of Wonder Woman, nor does it set any form of narrative expectations. Still, what good are rules if you cannot break them. Mostly because I find this cover far more interesting than the majority of variant covers that tend to just be straight forward character renderings. Also, Joshua Middleton has been telling his own story with the work he has been doing with his Wonder Woman covers as he represents the power, beauty, grace, and history of the character. Where other cover artists tend to repeat the same type of imagery his work has more creativity and originality. 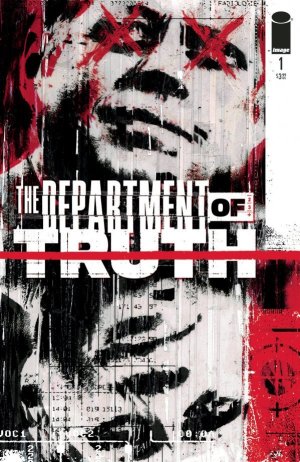 The Department of Truth #1

When it comes to the importance of covers there is none higher than that of an issue number one of an indie series. The current state of comics is flooded with content so a good cover can set you apart and get people’s attention. Outside of that it gives insight into what your book is actually about. There’s no using well-known iconography as a crutch. Martin Simmonds’s cover for The Department of Truth is a product of great design and works in tandem with the title of the series. Evocative of a madman’s musings as he scans for clues and hints to the secret conspiracies that are controlling us all. Most importantly it stands out compared to other comics on the shelves. I cannot think of a cover that has a look quite like this one, as if you are holding a byproduct of the vary story you are about to read. 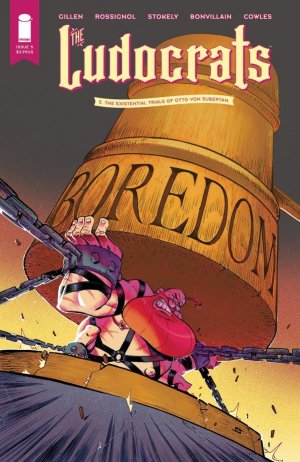 Of all the different types of comic covers to pull off the comedic ones have to be the hardest. To tell a funny story in one still image is not an easy thing to accomplish. This is again not a series I am keeping up with but this cover had me asking that all-important question of, “What the hell is this?”. What appears to be a miniature person held in some sort of bondage trying to stop a literal gavel of boredom from crashing down. It is head-scratching enough that I am enticed to pick up the book just to figure out how this scene plays out. Assuming this scene is indicative of what’s inside the comic. When it comes to cover making me ask questions I want to see answered is a key factor to being successful. 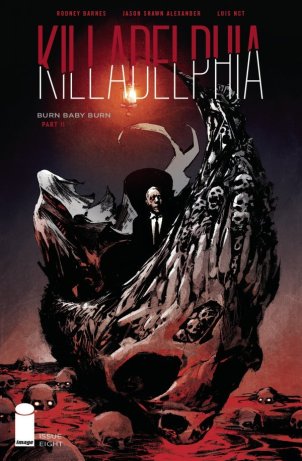 Speaking of questions Killadelphia has me asking plenty as well. Seemingly taken influence from the mythological river Styx’s this interpretation is all kinds of creepy. Loaded with skulls everywhere it is clear death is on the mind. What also stands out is this version of death is not cloaked in darkness but instead a white cloak. Also the way the lantern is placed within the cover it almost looks like it is lighting up the title of the book as well. Coloring is easy to overlook especially with covers but here it is vital to make the image come together as well as it does. The blending of the bloadsoaked water within the darkness of the image completes the look. 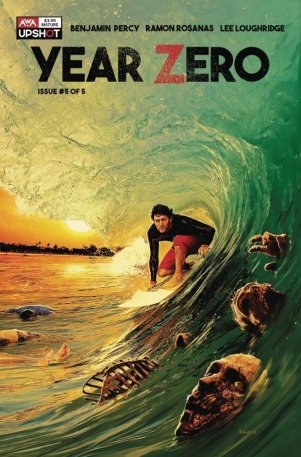 Nothing quite like a classic use of juxtaposition to make a cover sing. Here seeing the idyllic image of a person surfing crystal clear waves on what appears to be a pristine beach. Within that imagery however, are the severed corpses of individuals along with the grasping jaws of a few zombies looking to ruin this surfers day. There is a bit of humor with it as well without really trying to be too on the nose. It is very much in tune with what this series has been like thus far. It is like the perfect postcard to send to something to let them know how you are facing the most recent zombie apocalypse.