Welcome to my choices for the Best Comic Book covers this week. So my taste may be different than some. I’m looking for creativity and mostly story in my covers. Variant covers that look cool but have little to do with the contents inside the book typically are not included.

If I am being honest this was not the best week for cover. I like my choices but the depth and overall quality were a bit lower than in past weeks. Hopefully, the content inside will make up for it. 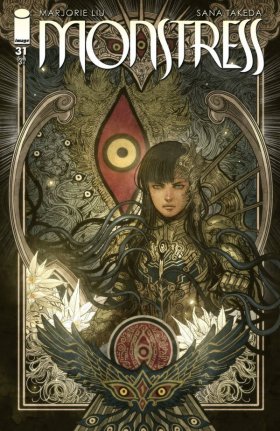 In a generally slower week, I am happy to see a new issue of Monstress is coming out. You are always guaranteed to get a cover that looks pristine. What stands out is the varied textures you get in Sana Takeda’s art. In the background, you have what looks like this feathery design like a cross between a bird wing and a butterfly. Then on the character’s clothing as this sleek armor configuration. Coloring is also as great as ever. You do not have a great deal of variety but the heavy use of blue, gold, and green make those white flowers standout to a tremendous degree. When you look at a cover like this it is no wonder Monstress has won so many Eisners. 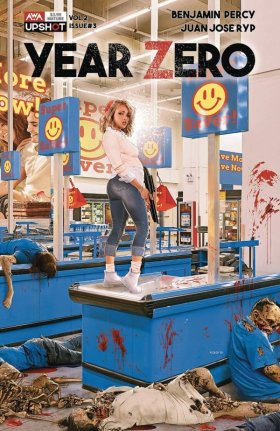 Year Zero is another one of those series that always has intriguing covers. Seeing this pregnant woman standing on top of a checkout surrounded by blown away zombies evokes a lot of questions. What you have here is a setup that is immediately intriguing. How can she survive a nearly impossible situation? What comments will be made regarding box stores in general? Was that gun on sale? Is she actually in one of the best places to survive a zombie apocalypse, and lastly what happens if the baby decides to come? It is like a situational comedy meets zombies. The photorealism of this cover does not match the artwork inside, however, it reminds me a lot of how Vertigo was in the ’90s. How each comic had a distinct cover design that may differ from the interiors but set an overall mood. 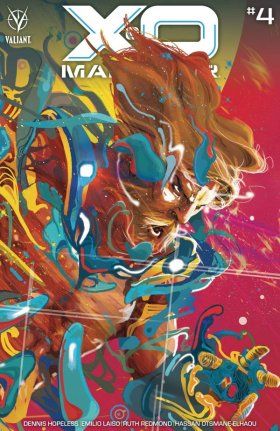 When you look at this cover there may not seem to be a lot of story here. Considering the setup for this issue, this is telling us a lot about the upcoming plot thread. In this issue, Arik is getting a new suit. For X-O that is more than a cosmetic change since his suit is actually a sentient being. Maybe that being felt like it needed a haircut, or is having a bigger existential crisis. When I look at this cover transformation comes to mind. As if the old armor is leaving his body to make room for the new. Paul Renaud’s design has a type of graffiti-like aesthetic with how messy some of the lines are. Those colors are bold right out of the gate. Magenta in the background to play against all those blues and red. Energy is the word that rings in my head looking at this cover. Despite being focused on a small portion of the character Paul Renaud gets a lot out of every piece. 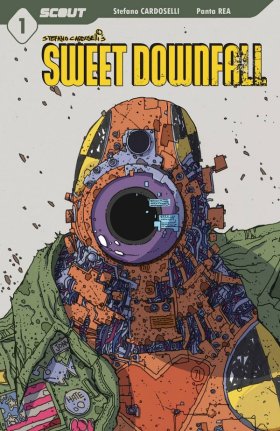 In my opinion, there is no more important cover than that of the indie number one. You need to be able to stand out in a crowded field while giving readers an understanding of what they are about to experience. What stands out with this cover is the picture of this character. So many small details from the wires in the neck to the patches on the jacket. You can tell a great deal of thought was put into this, and the quality of the drawing leads one to believe the inside will be just as good. Those safety signs also clue you into this character’s true identity. When you have a cover that is just a standing image of a character it is usually pretty dull. This is anything but because you have a character trying to act human while looking like something otherworldly. 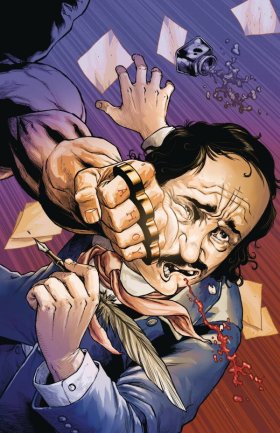 When there are covers that try to go with more of a comedic spin I try to include them. Being effectively funny is much harder than just looking cool. Edgar Allan Poe’s Snifter Of Blood has had a number of covers make this article because they show how to do it right. There is something naturally funny about putting Edgar Allan Poe in these precarious situations. If you look into the life of Edgar Allan Poe he is the type of person who would find a way to get punched in the face even after his death. The ‘Ahoy’ tattooed on the knuckles is a nice little touch as well. Clearly, someone was not a fan of Poe’s latest work. To be fair being dead has been known to cause awful writer’s block. Plus that is one powerful looking punch. From the blood spewing to the flying tooth, everything speaks to a major impact. Poor guy. 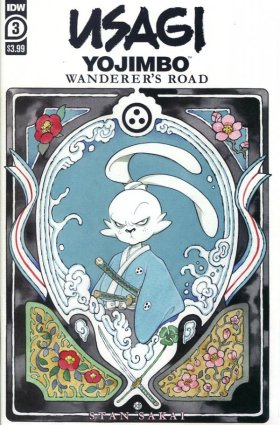 Peach Momoko is one of the biggest names doing covers currently. She does not get enough credit for how varied her style can be. If Stan Sakai is letting you do work on his book there’s a good chance you are a special talent. What makes this cover work is the design. Soft colors to create a welcoming palette.  Outside of the sharp cartooning of Usagi, you have the surrounding imagery that brings the cover together. Momoko also gave Usagi a sly facial expression that looks like controlled rage. He is eying up someone so you know things are getting serious. There is a bit of attitude in those sly eyes. Even the way his ears stand provides a sense of personality. There is a timeless quality to this cover. Considering Usagi Yojimbo is a timeless series that aesthetic fits well. 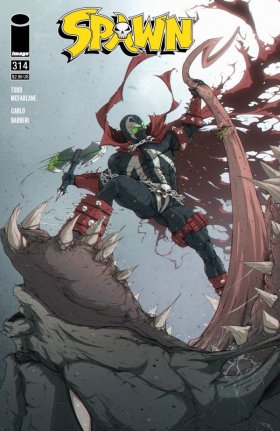 “Spawn gots your tongue”. If this was a lesser book that would be the exact quip filling the dialog bubble. Of course, a record-breaking series like Spawn is going to have a lot of great covers. This week it had at least three. Todd McFarlane is not messing around even this late into the run. What I find though is they are often dark and damp to fit the mood of the book. Here that blue sky standouts because by default Spawn is not a character you associate with the daytime. Similar to Batman, shadows and darkness are his best friend. With a brighter scheme, we get a great look at his entire costume. Even after all these years, his look remains one of the most badass in comics. That ripped cap makes it appear this battle has been a challenging one. Spawn’s ax is at the ready to land what will be a bloody blow. 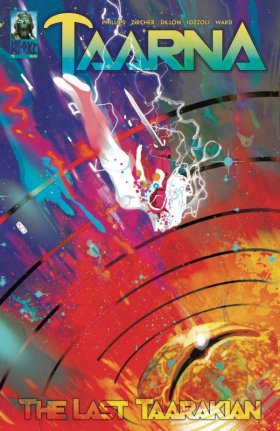 One thing I love about comics is you never know where great artists will show up. Here you have Christian Ward doing a cover for Taarna #2. As an artist, Ward has a knack for using colors like this in effective ways. Cosmic is his forte so it was a smart editorial choice to pick up for this book. This looks like you are seeing the eye of the universe and Taarna is diving headfirst despite the danger that awaits. I mentioned in my Most Anticipated article that Taarna is a character I have very limited experience with. However, this series has caught my eye due to the creative team. The covers are apart of that as well. You are getting to see the type of warrior Taarna is with imagery like this. If you are trying to re-launch a character to appeal to a new audience this is exactly what you should do. 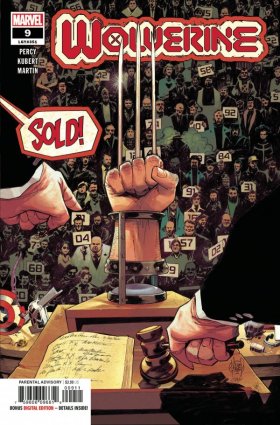 No question this cover wins the award for the most story this week. This evokes a lot of questions. Is that actually Wolverine’s hand? If so how exactly did he lose it? We saw with the Age of Apocalypse it is possible for him to lose a limb so it is not out of the question, but would they be willing to go that far in the main title? When you look at the table you see even further legendary weapons including Captain America’s shield and possibly Thor’s hammer. Something clearly is amiss. Looking in the crowd some major Marvel villains are in attendance. Kingpin is the easiest one to pick out. He does tend to stand out in a crowd. All these questions or possibilities help build excitement that a random picture of Wolverine looking cool would not. 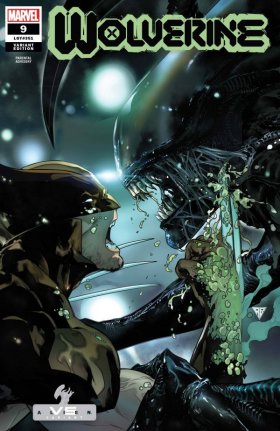 Now we go to a cover that tells the story of a comic that does not exist…yet. This month Marvel has been doing a lot of these Alien covers and some are better than others. For this cover, it helps that Wolverine fighting a xenomorph is inherently intriguing. Who would not want to see these two throw down in an entire comic? Would adamantium hold up to that infamous blood acid? Could the xenomorphs use their numbers to try to counteract his healing ability? If a facehugger latched onto Logan and eventually burst out of his chest would it maintain some of his power? Imagine a xenomorph with the properties of Wolverine? Please Marvel make this happen. So much of this story just writes itself. R.B. Silva has designed a tense image. Two characters fully bent on the other’s destruction. 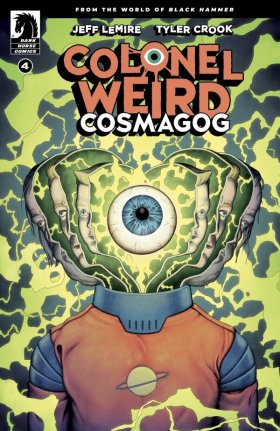 My favorite cover of the week comes from Malachi Ward and the work he did for Colonel Weird: Cosmagog #4. This series has followed the life of Colonel Weird in three main time periods. Each of these split heads represents one of those places in time. Obviously designed to show how each story is happening simultaneously despite their place in time. Colonel Weird has lived up to his name since he first appeared in Black Hammer. As a person you never knew what exactly he was saying or when.  A lot of random weirdness actually had a purpose. Much like this cover. An all-seeing eye at the center that maybe is the force propelling this entire narrative. Love how it also reflects the cover logo as well. Keeps that motif going.