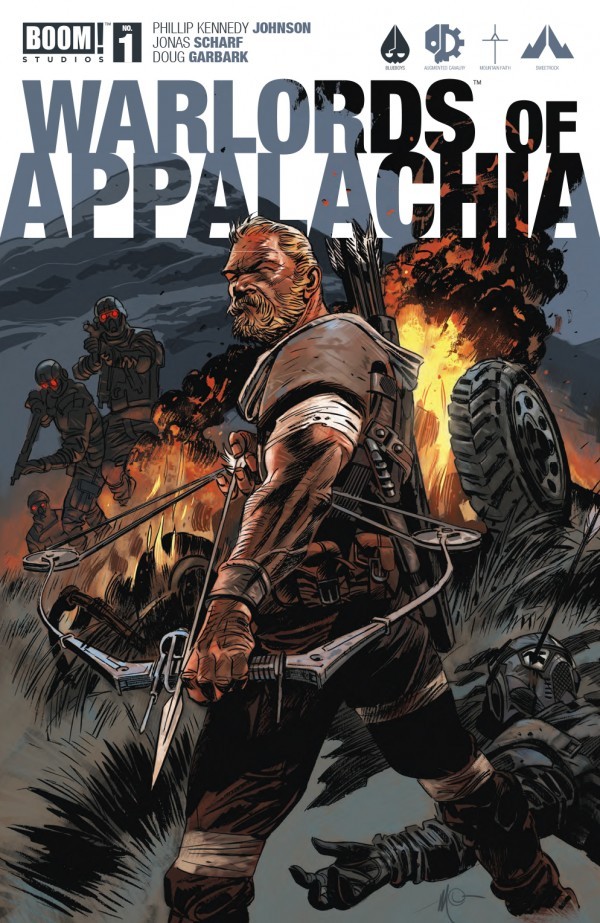 Often when it comes to the first issue of a brand new property you will either get a story that heavily focuses on world building or one that pays more attention to its characters. The best first issues are those that are able to accomplish both without the story becoming overly bloated. That is what happens with the first issue of Warlords of Appalachia. Writer Phillip Kennedy Johnson strikes a balance by using his characters to inform us about the world we are in through their words and actions.

Right away we hear a type of tonal rhetoric that is so often used in today’s world. Some form of radio personality is spouting an angry fueled diatribe that may have details that are unlike our current state, but the style and intent are clearly similar. We learn the world has gone through yet another Civil War for reasons still unknown. Although that war is over the state of Kentucky still refuses to fully surrender. Now it has become occupied territory with horrid living conditions and National Guardsmen keeping the peace.

One of those individuals still residing in Kentucky is Kade Mercer. Clearly he will be the vocal point of this series moving forward. Right away we see he is a man not to be trifled with. A former soldier who got out before the war started he appears content with just keeping his family fed and safe. Still he does not flinch when threaten or challenged.  When a guardsman gives an offhand remark regarding his son, who has apparently been transformed due to the local drug sweet rock, he is unafraid to challenge the man despite the repercussions. Perhaps he is a man with a quick temper or perhaps there are lines he will not let anyone cross.  Mercer does show a softer side with his son as well. One side effects of the sweet rock drug is it has left his son mute and nearly emotionless. Despite that Mercer takes time to reach out to his son and comfort him.

With all of this Mercer is an easy character to get behind, and based on the world he lives in having a quality leader to follow is rather uncommon. That becomes apparent as heighten tensions boil over after a small skirmish leads to the disappearance of two US soldiers. By the end it is clear that a very bad situation has gotten much, much worse. This chaos does develop rather rapidly causing the final events to come off as rushed.  Besides that issue the overall pacing was spot on.

Jonas Scharf’s character designs show us the different sides of this combat. Those living in the occupried territory are broken and war torn. The baggage of this conflict is displayed on faces old and young. Clearly life has been tough as joy has become a mythical emotion that no longer exists. This works in contrast with the US guardsmen who appear slick and well put together. Overall Scharf does not give a lot of minute detail, but when he does it is effective.

Warlord of Appalachia is the type of story that has roots in the society of today without being too direct. Throughout the issue we are subjected to a brash radio host that is obviously designed after many of today’s prominent personalities. Johnson peels back his true character bit by bit until you cannot help but hate him. The final revels was not as shocking as it was met to be, but I am not sure if that lack of surprise was due to the quality of writing or today’s current political climate.

The world of comics is quite filled with books along this nature so you need to do something to stand out. Whether it is the distinctive rural setting or purely good storytelling Warlord of Appalachia is not effected by a flooded market. This is a book worth getting excited about.