WHY I NEVER CARED ABOUT JASON TODD…. 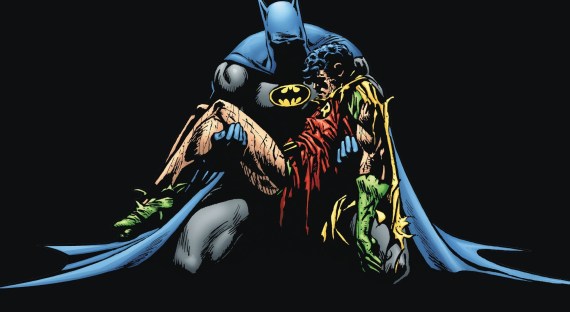 Jason Todd was never on my radar growing up, because I was only eight years old when the voting happened. And then A Death in The Family was published. Plus I was more of a cartoon kid than a comics kid! Once I got into comics, Jason always felt like an after thought, because Dick Grayson was my Robin and Nightwing!

Over on THE PULL BAG back in 2014, when we were celebrating 75 Years of Batman. Steve/Megatron and I covered this landmark story. You can hear that HERE! So between not being introduced to Jason at all, and later in life, just not giving a crap. You could say that Jason never had any consequence in my superhero love. Jason was always the character who was a Robin in an overtly violent Batman style. When they brought him back, and made him the Red Hood, I kinda liked that, but never was I overly enthused that he was a part of the bat family. I know what I’m saying here is sacrilege to some comic reading fans, but we all like and dislike different things, and Jason was never my go to, it was always Grayson than Drake for me.

I guess you could say I need to rediscover the classic Jason Todd, but honestly that’s not where my interest lies. Where my interest lies is in Sean Gordon Murphy’s White Knight series. Because Sean takes the classic tale and twists it to his whim, unintentionally making Todd the first Robin, and Grayson the second. We still have the events, although they are unseen of The Joker torturing Todd, and him relenting, but it creates a whole new dynamic.

So yes I’m interested in seeing where Sean’s version of Jason Todd goes, and what happens to him. Because all of the characters in the “MurphyVerse” matter to me, simply because it’s the best Batman series in a long time in my eyes! My friends Dan and DJ helped me with Parts 1 and 2 of the White Knight Series, this is the entirety of the first 8 issues series. After that my friends Edward and Kendra Hale have helped me review the rest of the MurphyVerse so far over on The Pull Bag. It’s 6 hours 41 minutes and 37 seconds of amazing times podcasting with friends. You can listen to all those episodes HERE, and we will be continuing on in the future!

WHOOPS! I forgot to mention that before writing this up, I asked some of my twitter friends, how old THEY were, and if they read the A Death in the Family story when it was first released. I got some great answers, you can see the thread HERE. :-)