Cryptozoic to Launch Second Ghostbusters Board Game Kickstarter on April 11

Lake Forest, CA – March 22, 2016 – Cryptozoic Entertainment (cryptozoic.com), leading creator of board games and collectible cards, and Sony Pictures Consumer Products are proud to announce the upcoming April 11 launch of the Kickstarter campaign for Ghostbusters: The Board Game II.

This new crowdfunding campaign follows the successful Ghostbusters: The Board Game 2015 Kickstarter campaign and retail release. The new board game is crafted with fans in mind, and allows players to: 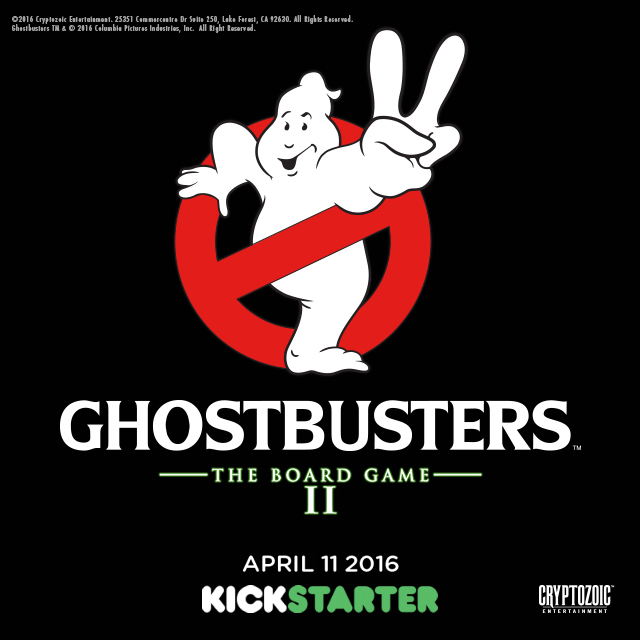 The game’s tutorial scenario will be on display and open for play at WonderCon, March 25-27 at the Los Angeles Convention Center, Booth #1862.

Founded in 2010, Cryptozoic Entertainment, Inc. is a premier developer and publisher of original and licensed board games, card games, comics and trading cards, including the DC Comics™ Deck-Building Game, The Walking Dead™ Board Game, The Big Bang Theory: The Party Game and Ghostbusters™: The Board Game, one of the most funded tabletop games in Kickstarter history. Following a philosophy and core principle of “Fans First,” the dedicated gamers and fans of the Cryptozoic Entertainment team are focused on producing fun and amazing products along with epic events that bring all gaming fans together as part of the Cryptozoic community. Visit www.cryptozoic.com for more information about product releases, events and news.