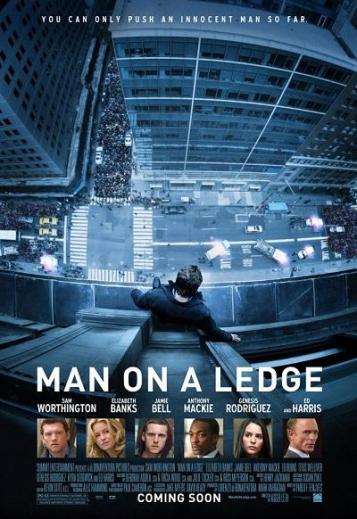 When developing a concept film it takes a find hand to make something that ultimately works. If treated with broad strokes a concept can seep into gimmick territory leaving you left with a rather inferior product. Simply based on the title you can tell Man on a Ledge is a film that relies on its concept working. Unfortunately the title does a better job of developing the story than the actual script. It evokes a lack of care and dedication to being anything more than bland. There are moments that work, but those a few and far between. While I wouldn’t go as far to say this film is completely pointless in the end it fails to get off the ground.

The man on the ledge is Nick Cassidy played by Sam Worthington. He is a former cop turned ex-con with a plan to reclaim his innocence. After recently

escaping from prison he checks himself into a hotel, eats a luxurious meal, and writes what seems to be a suicide note. Shortly after that he opens his window to look down at the city beneath him. He then does something to move his final plan forward.  He walks right outside onto the window’s ledge in what seems like a suicide attempt. With death nearly inches away he starts to draw a crowd of onlookers who callously wait for his demise. The police show up in an attempt to talk him down, but he refuses to go anywhere. However Cassidy has no plans on dying this day. While he draws the attention of the police and news media his brother is a block away attempting to steal the evidence that will prove his innocence. The hope is his suicide attempt will provide the distraction needed to break into a major building during the middle of the day.  It’s a bold plan that can go wrong at any moment, but it may be the only chance Cassidy has left.   The concept here isn’t groundbreaking but does have a certain level of potential. That potential can be ceased on with a strong script and charismatic performances. The issue is neither of those are present. The script is pedestrian and fails to create a cohesive story. It’s layered with conveniences and a number of inconsistencies that lead to viewer frustration.

The performances are a mixture of fine to downright awful. Sam Worthington is an actor I have yet been able to get behind. He comes off as one of those actors that the movies studios are bent on making into a star. Taylor Kitsch from Battleship and John Carter is another example of someone who gets heaved to the forefront in hopes they will stick with audiences. Typically this leads to failure and Worthington’s career is already dragging. While he is a serviceable actor he is essentially replaceable. Nothing about him is unique or exceptional enough to cause his stamp to be placed on a movie. He’s been in huge franchise film after huge franchise film but never were their successes or failures hinged upon his performance. Man on a Ledge is a perfect example of this. Overall he is fine and serves the part well, but he does nothing to elevate the rest of the movie around him. In a way he is kind of like a grilled cheese sandwich. It does the job of soothing your hunger but no one ever yearns for a grilled cheese sandwich. Well unless we throw tomato soup into the mix then we have a party. When watching this I couldn’t help but compare it to Safe House that came out early this year. That as well was a movie with a recycled concept but what made it better than average was the performance of Denzel Washington. He provides a presence that was severely lacking here. Instead you are given performances like Elizabeth Banks portrayal of a police psychologist with a haunted past. It was a blatant miscasting that never worked. She is supposed to develop this emotional connection with Worthington but neither do anything to sell it. While it is obvious to the viewer what is taking place the characters seem unable to notice the obviousness that is right in front of them.

This isn’t an absolute failure however. One thing I did enjoy were the real time transitions between the Nick Cassidy on a ledge sequence with the break-in sequences. They had this nice sequential flow going as Cassidy would be trying to hide the fact he was providing advice for the break-in while at the same time talking to the negotiators. The use of the camera, editing, and sound design all made those moments fit together nicely. The issues began as that sequence began to expand when it should have been concluding. It was clear that this story does not fit into the feature length format.  What should have been just a sequence or a film climax was the entire plot of a movie. It attempted to find ways to stretch it out but none were effective. Issues would come up and they would have to attempt to solve those issues. An unexpected alarm or a well placed guard would cause the plain to go haywire.  This could have work but the problems along with the solutions were extremely uninventive.  Also those issues caused the movie to slowly chug along . This should have been a movie thick with tension but there’s really none to be found. The culprit for this crime is the combination of inefficient pacing and the fact you know the suicide attempt is a ploy. I wonder if we as an audience were kept more in the dark if it would have served the movie better. We already know the plan, the reasoning, and who is to blame  so watching the cops put everything together isn’t all that interesting.  We are just waiting for these characters to play catch up to get to where we already are. However if our vehicle to this story was Elizabeth Banks’ character putting all these clues together becomes more stimulating.  I try not to play Monday Morning Quarterback for movie plots but in this situation I can’t help myself. The movie certainly provided me a lot of time to do so.

Failure for film can happen in a number of different levels. Horrific failure causes you to question your life choices while failure on a lesser level just leaves you bored. Man on a Ledge is by far not horrific failure. Sure I became frustrated and could never get invested in the story, but I was never angry at my choice for watching it. This is one of those movies you can throw in the background while you working on something else and get the same amount of pleasure if you would watching with 100% focus. If you walk away for five or ten minutes no issue as you will have no problem catching up with what you missed. In fact its not too far off to say that the title tells pretty much the whole story.