Welcome to another installment of Movies to Show My Son. This is the blog series where I discuss movies I can’t way to show my son in the future. I’ll be covering my own personal experience with the movie, movie and life lessons I hope he will learn, and lastly my concerns about showing said film. This week’s film is 12 Angry Men.

I did not watch 12 Angry Men until after college, which is a sin I do not want my son to repeat. It took the closing down of my local Blockbuster to finally get me to sit down and watch this all-time classic. Personally Blockbuster closing was a blow for me. I miss going to the video store and traversing all its isles until finally finding the movie you want. Plus early on the majority of my personal DVD collection was made up of used Blockbuster DVD’s.

My local store was one of the first ones to go under and I took advantage as they sold off nearly all their stock. By the time I got there the majority of titles were already gone but 12 Angry Men caught my eye. It was one of the few times I actually watched a movie the same day I bought it. Typically a movie will spend ample time on my shelves before I even open it.

When watching it I was reminded by how much I love movies that take place in one day as well as mainly one location. Also for a film that was literally just men talking in a room it was remarkably  cinematic. Everything about it immediately clicked for me—the characters, its message, themes, style, and even its title. Rarely do I watch a movie only once and feel comfortable saying it is immediately one of my favorite films. 12 Angry Men is one of the few where that happened.  Of course I have watched it many times after.

As mentioned 12 Angry Men is a movie from the 50’s involving men in a room talking. That does not reek of a movie made for toddlers. I will get into it more with the life lessons section but feel this is best watched during or slightly prior to high school years beginning. High School is that time when we all discover who we are and that journey is not always smooth. Peer pressure comes from all over and oddly  12 Angry Men highly relates to the challenge.

Sidney Lumet is one of America’s greatest directors so you can learn a great deal from nearly any of his films. You can be assured further Lumet films will be a part of this series. 12 Angry Men would not be the movie it is without a director of his level. As stated when you are working with very limited space you need a person who knows his way around the camera, and also knows how to use limitations to his benefit.

The confined space is an important element to establishing tension. There is no place to run or hide from the conflict that continues to escalate. We have all been in those rooms where everyone feels uncomfortable and on edge. What my son can learn is how location can be more than simply a place where things happen it can be a key contributor in propelling the progression of the story.

12 Angry Men also shows how we can learn about characters through small details. Twelve people is a sizable cast and all we have to go on are these few hours we spend with them. So the details of body language, clothing, and tidbits we learn through conversation tell us what we need to know. This teaches us that characters are built not just from their grandiose actions but minor moments as well.

Jack Klugman’s character is perhaps the most obvious example of this. His lack of interest in the case or larger interest in the current state of his favorite baseball team gives the audience a direct character to relate.  We have all been in stuck with obligations we have no interest in that take us away from something we actually enjoy. Looking at the films message it is important to have a character or multiple characters when you can form a connection and understand where they are coming from. When you can see yourself within a character the viewing experience is that much more of an impact. 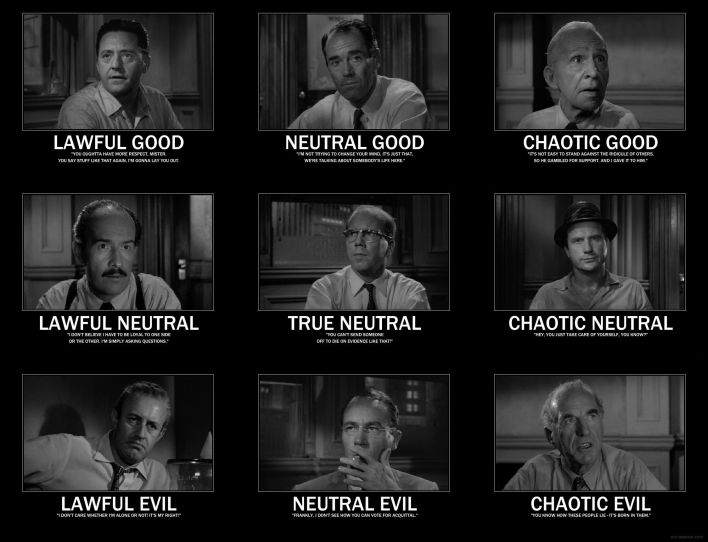 There are tons of life lessons you can take from 12 Angry Men that are just as relevant today as they were when this was first released. Clearly this was well ahead of its time. Looking back at the specific time to show this film it has a message nearly all High Schoolers need to hear. That message is the importance of standing up for what you believe in even when it is hard. During High School we all wanted to be accepted by our peers. No one likes to be the outcast so rarely are teenagers willing to go against the grain. There comes a point and time though when it’s necessary.

When everyone in the room is saying yes it is not easy being the only person saying no. It is important to remember it is not an easy task to speak up when others stay silent. People will challenge you on every level. Principals  only mean something though we you stand by them when things are difficult. Now I do not expect my son to be on a jury during his high school years but I can think back at times during my high school years were I failed to be juror number eight. They were times when kids were being picked on for a number of reasons, they were different or perhaps did not have a sexual orientation that was accepted at the time.  I do not think watching  12 Angry Men would have propelled me to stand up in those moments, but watching it with my son could lead to some important conversations where he can learn from my failings.

12 Angry Men also shows how our prejudices and preconceived notions impact us in ways we do not realize or are too afraid to admit. It is the verification basis that is hard to avoid and recognize. When we take limited facts about a situation and pick and choose the narrative we all wish was true.  As difficult as it may be listening to the other side can be beneficial in understanding our own limitations. The key is being willing to accept the facts even when they do not verify the truth we hoped.

12 Angry Men has a number of barriers that could limit a teenager from really enjoying it. Personally I love films that are limited in scope and take place solely in one location, but a teenager may find that very idea extremely boring. As mention part of what can make this film so effective is finding a character or characters to relate to, but when a movie is about a time nearly a century before yours there may not be much to relate to on a personal level.

The other piece is that it may be setting up false expectations. Most often when you are a no in a room full yes’s you will either be ignored or shouted down to the point you wish you were ignored. Especially when people have better things they wish to spend their time on. Instead of taking the time to actually listen to your thoughts they will just wait for the moment you stop talking so the vote can be cast.

Additionally we live in a world where  people are rarely willing to change their mind no matter what evidence you put in front of them. This era where people will merely shout “Fake New!” or “Alternative Facts!” against anything  that may show that they are wrong. The same goes for a wiliness to admit prejudice even when it’s obvious. Often people will find an excuse to hold close minded beliefs or worse case hold a level of pride for those beliefs—a level a pride so strong it leads to them viewing themselves as the victim and the one being attacked.

What needs to be understood is that in a way 12 Angry Men is a best case scenario. There will be times when you fight for a belief and principal you feel strongly about and end up losing. The key is not to fold just because things are difficult. Also it may be important to take a step back and see who exactly you would want to be in that jury room with you. Are those you hang around with willing to understand the stakes of the situation and learn all facts, or are your friends closed minded individuals who would want to get the vote over so they can catch the game? I think that is an important question we can all ask during every stage of our lives. We would all like to think we would be juror number eight but would we? If I am being honest with myself I know there have been many occasions where I failed to do my civic and societal duty, which is a failure I hope my son does not replicate. Using 12 Angry Men as a base for conversation may help ensure that is the case.