Welcome to another installment of Movies to Show My Son. This is the blog series were I discuss movies I can’t way to show my son in the future. I’ll be covering my own personal experience with the movie, movie and life lessons I hope he will learn, and lastly my concerns about showing said film. This week’s film is Toy Story.

Toy Story is one of those movies that I remember exactly the first time I saw it. I did not go to the theater much as a kid so I caught up with it when it hit VHS…yes VHS. I was home sick one day and we recently picked up a copy for our family. I would like to think my being home from school and recently buying Toy Story were unrelated but I cannot guarantee that to be the case.

Safe to say I spent much of that day watching Toy Story. If memory serves me correctly I ended up watching it a few times that very day. Obviously it was in an animation style I had never really seen before in the context of a film. Up to that point my greatest exposure to CGI animation was the animated cartoon series Reboot. This was on an entirely different level. I remember saying to my mom how real all the vehicles looked. I could have sworn the semi-truck that almost runs over Woody in the gas station was the same truck used in another favorite film at the time Terminator 2: Judgement Day.

I loved it so much it impacted what I wanted to get for by birthday that very month. I am not sure why but all I can remember wanting is my very own remote control car. No it was not a Buzz Lightyear or Woody figure I wanted, but rather a remote control car. Safe to say I was somewhat disappointed when I realized they do not go nearly as fast as this film leads you to believe. Oh and also how you would need to charge the battery for like sixteen hours for twenty minutes of playtime. It was awful. I grew up in some rough times.

This is kind of a cheat because my son has already watched this. Considering he was only twenty-two months old at the time I am not really counting it. I will say it kept his attention throughout, and up to this point not one TV show or movie has kept his attention that did not involve either Elmo, trains, or a random combination of both.

Toy Story has a lot of landmarks to its name. Not only is it the first ever feature length CGI animated film it is also the first ever animated film nominated for best Screen Play. Rewatching this recently the nomination was well deserved. The script is so precise without a wasted moment. Within only the few frames you get an understanding of this world, who these characters are, and every characters’ personality type.

Where a lesson can be taught is how much each voice informs the audience about each character. Look at a character like Rex for example. Using the meek voice of Wallace Shawn may be stunt casting, but it is a stunt that works. Immediately Rex becomes a more interesting character simply by Wallace speaking his given lines. You have the same thing with casting Don Rickles as Mr. Potato Head and R. Lee Ermey as Sergeant. Yes their real life personas are part of what informs you about the character, but as a kid I did not have that background knowledge. However, once I heard Don Rickles’s shtick as Mr. Potato Head I was overtaken with laughter.

My hope is my son will see that casting matters. Even if it is just a voice, a good performance is not just enough. You need a good performance that fits the character on screen. With Toy Story that is a little more obvious as each character has a distinct way about them.  With an abundance of characters and limited time the creators of the film needed to use each tool to the best of their ability, including picking the right people for the right roles.

What I love about Toy Story is how Andy plays with all of his different toys. There is an element of imagination each time. He’ll craft his own stories and use toys in ways well beyond what they were originally intended. Walking down any toy isle you will see how impressive and vast today’s toys are for kids, but at the end of the day it is not the toy creating the fun it is the kid. Imagination is an important muscle that needs to be worked to grow. When we live in a world where virtual reality videogames and an unlimited movie selections are only a click  that muscle can become dormant. Ironically though it is a movie like Toy Story that reminds us of its power when put into practice.

That is just a small lesson to take away from Toy Story. Outside of that it demonstrates the destructive force of jealousy, the power of friendship, the importance of being yourself, and that is perfectly okay for two people who believe different things to stay friends. In a world that is so currently polarized there may not be a better message to learn.

You have Woody who has a very stern belief over what a toy is and should be, while Buzz clearly feels his purpose is far great than being, ‘A child’s play thing’.  Now by the end Buzz learns the truth, but look at what it took and caused. The other toys accepted Buzz for who he was even if they did not believe the same things he did. Woody on the other hand couldn’t bear to do the same. That ontop of his jealousy nearly destroyed him as a persoo..er ahh..toy.

That aspect of the film could lead to some deeper discussion about what do you do when someone believes something you feel is not true. Where is the boundary between standing up for what you believe in, but also being willing to accept others for their own beliefs? 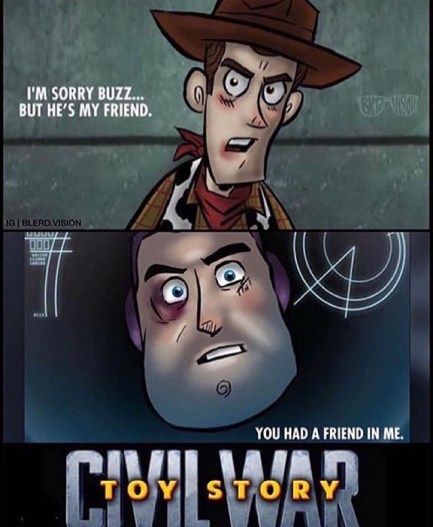 My biggest concern with Toy Story is if it celebrates a materialistic culture. Does it overly dramatize the relationship people have with their toys? Will kids attachment to their toys grow to an unacceptable level of watching the film? Looking at my own personal history I remember the  impact it had on me. How after watching it my first instinct was to run to my mom and tell her what I wanted for my birthday.

Back in the 80’s we saw the explosion of cartoons that were solely designed to sell more toys. (Thank you President Reagan for removing the regulation that made it illegal for cartoons to have a direct toy line) That strategy worked so well that decades later we are still getting awful Transformers movies. I know many adults that spend astronomical amounts of money to buy toys that will never be taken out of the box. 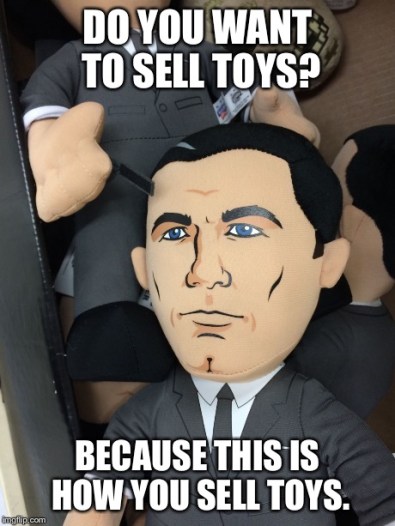 Is Toy Story any different? Inside this well-crafted film is there a secret Disney message provoking our kids to buy more Disney and toy products? The answer of course is yes because everything attached to Disney has some form a secret message. I’m sure if you read this blog backwards it will implore you to join Disney Movie club. (If that happens hit me up. I can recommend you and get two free movies…just saying)

Ultimately though unlike something like Transformers, Toy Story is not specifically designed to sell toys. It’s no Cars! (FYI I actually like Cars) It may be a side effect. It is not the intent. The key as a parent will be highlighting the lessons of imagination, friendship, and understanding the movies brings and minimizing the desire to go out and buy everything Buzz Lightyear.