Welcome to another installment of Movies to Show My Son. This is the blog series where I discuss movies I can’t way to show my son in the future. I’ll be covering my own personal experience with the movie, movie and life lessons I hope he will learn, and lastly my concerns about showing said film. This week’s film is Who Framed Roger Rabbit.

What surprised me about my memories of Who Framed Roger Rabbit is how I do not have many of them. As someone who was born in 1984 I was the right age for It, but for whatever reason, it was not one of those showcase films  I watched as a child. Part of me thinks it was because my parents did not allow me to watch it, and after rewatching it recently I could understand why.

There are some moments that do stick out.  Donald Duck and Daffy Duck playing dueling pianos was something that blew my mind as a child. Seeing Bugs Bunny and Mickey Mouse hanging out together was also an epic moment for my young self. Even as kid I knew it was not common to see Disney and the Looney Tunes together was not a common occurrence.

Growing up I did watch both classic Looney Tunes and Disney cartoons. I remember having a number of VHS tapes that included classic Goofy, Donald Duck, and Mickey short films. Nickelodeon would constantly air Looney Tunes reruns and Tiny Tunes was also reinventing them for a new generation. So the interest I had at the time had little to do with the actual main characters of the movie.

Going back and rewatching this you can see how much the PG rating has changed over the years. There are a number of adult themes and choice words that would make me think this same exact movie would be PG:13 if it came out today. With that said I feel thirteen is far too old for a first time watch. A first-time watch should be around the time when cartoons are still a very big deal. Around the age of six or seven when you are making the transition away from shows like Sesame Street and more like Looney Tunes. 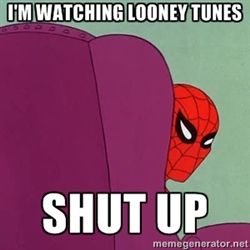 Who Framed Roger Rabbit is the perfect introduction to the genre of film Noir. Every trope Noirs are known for are touched on in some way. As a kid, I never caught on to what they were doing, but as an adult going back rewatching it decades later I saw so much genius in its presentation. It’s not a spoof of the genre, although it easily could have been, but rather the ultimate homage.  Director Robert Zelmeckis keeps the tone completely straight and simply adds in cartoon characters into a common crime tale.

My hope is this will be a gateway drug (perhaps not the best term to use I grant you) into the crime genre. It’s like when you get someone to eat something but do not tell what exactly they are eating. You wait to let them enjoy it first before you reveal what rocky mountain oysters are really made out of as you sit back and enjoy their reaction. The difference here is I could take my son’s enjoyment of this film and transport it to other movies in the genre.

Movies like The Maltese Falcon or The Third Man that are clear influences to a Roger Rabbit.  I remember watching The Simpsons as a kid and seeing a lot of jokes that went straight over my head. They were clear references to things I was not aware of but still humorous by themselves.  When I did finally come into contact with some of those references a light bulb went off and would find myself laughing about a joke I watched years earlier. Simpsons, the gift that keeps on giving.

My thought is something similar can happen with Roger Rabbit. Watching it the first time my son’s focus will mostly be on the cartoons and the story. When he is finally exposed to some of those classic films he is basically prepped for what type of film making he is about to witness. On a broader scale this also demonstrates how genre film making works. It is easy to tell the difference between action, drama, and comedy, but Noir brings you into another level.  Discussion can occur over other specific genres and what tropes and techniques they include.

There is a great deal going on in Who Framed Roger Rabbit. Inside this story that includes revolutionary special effects, some of the most iconic characters of all time, oh and a murder plot is an additional story about overcoming prejudice. Yes Eddie Valiant has a lot of legitimate reasons to hate Roger Rabbit. I do not think even the most patient person could stand to be around him for too long, but the biggest issue Valiant has with him is the fact that he is a toon.

We discover his issue with Toons comes from what happened to his brother as a toon was responsible for his murder. As a result of that tragedy he has gained a hatred for anything animated. What can be taught here is how people will often take the misgivings of an individual and  use it to legitimize their hatred for an entire group. Discussion can be centered around how do we react to people who negatively impact our lives. What are some prejudice or stereotypes we hold that we do not even realize?

Now Eddie Valiant is not alone in expressing prejudicial thoughts against toons. Most viewers will find themselves just as guilty when looking at the Roger and Jessica Rabbit relationship. Right from the start you become suspicious of Jessica simply because of the way she looks. How could someone that looks like her be interested in someone like Roger?  We later find out the amazing benefits of having a great sense of humor. That can lead to another discussion about how it is easy to point out someone else’s prejudice and ignore our own.

Speaking of Jessica Rabbit I do wonder if her character is too adult for children. Some of the sexual innuendo goes to an uncomfortable degree. A specific scene that comes to mind is when she plays ‘Pattycake’ with Marvin Acme. It is an effective joke, but does it go too far for a child under the age of twelve. Consider Jessica is a cartoon I am inclined to give it a pass.

My bigger concern is if the magic that once existed with this film is gone. Do characters like Mickey Mouse and Bugs Bunny hold any weight with children today? As a child I watched a lot of those cartoons, but to be honest a big reason was due to the fact they were the only cartoons on during the day. With the limitless options that we now have will my son care about characters that existed decades before color televisions even existed? I have attempted to show my son a number of hand drawn animated cartoons and despite my best efforts he expresses little interest.

Also seeing real people and cartoons share the same screen was revolutionary. Now it’s commonplace. Despite all these problems what makes Who Framed Roger Rabbit work so well has nothing to do with animated cameos or special effects. What makes it work is due to how great of a movie it is by itself. Those aspects are additional sprinkles to an already delicious cake. Maybe my son won’t have the same affection for Bugs Bunny , but I am sure  after watching this he will be a fan of Roger Rabbit…and probably an even bigger fan of Jessica Rabbit.

Catching Up with the Classics - The Saga of Swamp Thing: Volume I