Your mission should you choose to accept it is to read this review written by TFG1Mike of Mission Impossible Rogue Nation’s score done by Joe Kraemer. As always if you get caught or killed the Secretary will disavow any knowledge of your actions. This review will self destruct after you’ve read my thoughts on the score and the film.

2016 is the year of THE MISSION!! Next year the Tom Cruise Mission: Impossible Film Franchise turns 20 Years Old! I’m kinda surprised that they didn’t take advantage of that. But anyways the fifth mission is all about the Rogue Nation! In 1996 I remember exactly where I was May 22, 1996. I was in a theater in Lexington, KY watching the very first M:I film! Ask any of my friends on or offline, and they’ll tell you when I really like or love something, there’s no going back for me. This is engrained in my soul when it comes to film, tv, music, comics, any geeky media I consume. The M:I Film Franchise is one of the things that always excites me when I hear news of a new film coming out. The franchise has had 4 composers: Mission 1: Danny Elfman, Mission 2: Hans Zimmer, Missions 3 & 4: Michael Giacchino, and now with Mission 5 we have Joe Kraemer! I have to say that until Rogue Nation Zimmer’s score for M:I-2 was my number 1 favorite. Now before I go on… I have to talk about where I saw Mission 2 in 2000. It was at the ShowCase Cinemas on Bardstown Road.

ShowCase Cinemas on Bardstown Rd in its heyday 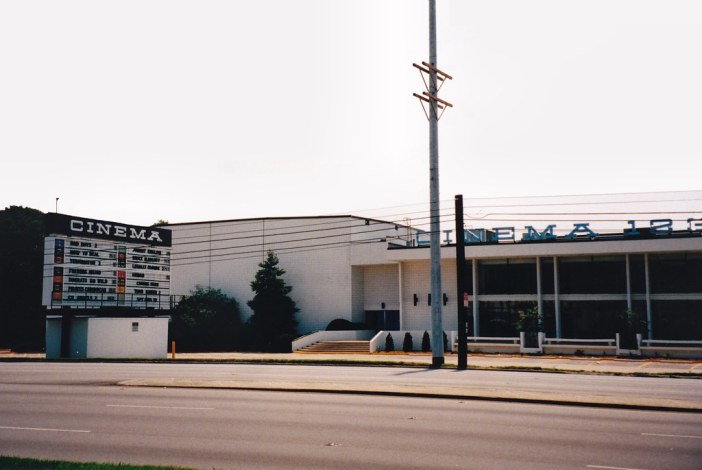 20 Years ago ShowCase Cinemas had a theater here in Louisville KY on Bardstown Rd. It was the best place EVER to see movies at the time. ShowCase Cinemas on Bardstown Road had been around and a staple of the area since September of 1965! In 2005 it shut off the projectors, packed up the popcorn, and closed it’s doors. In 2010 it was torn down. This is what the site looks like today. After all this time they are putting a costco in there! GRRR

OK back to the Mission here….. My point in bringing up and digressing on that tirade was that when I was younger I used to LOVE going to the theater to see films. These days I pick and choose which ones I really wanna see when they first come out. I’m more than happy to wait for the media release. In the case of mission: Impossible and Tom Cruise’s Ethan Hunt… I always see it in the theater on opening day. When I go to the movies… it’s always during the day, never at night. Because normally no one is there at a 1:15pm showing. I’ve seen Rogue Nation twice in the theater now. Something I haven’t done with any film since GoldenEye came out in 1995!! I saw it on opening day, and really enjoyed it. I had yet to receive my review copy of the score when I first went and saw the film. It showed up Friday 9-4-15… I knew I had to see the film again to remind myself of everything that happens, so I’d be able to write a well put together review of Joe Kraemer’s score.

This score has 19 total tracks. While reading the liner notes from La La Land Records we learn that Kraemer’s mission was to make the score feel retro. Joe says that he went about creating the score, as if it was something that could have been made in 1966 when the TV series was on. He also states in his liner note, “that there are no synthesizers, drum loops, or techno elements.” Everything Kraemer did with the score was right on point, and I felt that as I was watching the film the music carried well throughout it. With Joe’s score here I really felt as if the entire film was an opera. It felt like the familiar M:I format, but it was refreshed with the traditional musical score. Each action taken by either the good guys or the bad guys has its own unique theme to it.

Joe Kraemer does an excellent job of putting high action, suspense, mystery, emotional music together. There are even beats of when the danger arises within the film. I’ve listened through the score twice in a row now. Both times I find some new tone or note to praise. Track 1: “The A400” is where we begin, and you hear that classic beat of the M:I theme. Kraemer did such a good job evoking the feel of Lalo Schifrin’s classic theme. just like the past Mission Impossible scores every time Ethan Hunt is on-screen we will hear the M:I theme!!! This first track sets up the entire tone of the film so well. I love how Kraemer blends in and the boosts out the M:I theme around the action packed scene that starts the film. The first track here is 6 minutes and 40 seconds long. It doesn’t even feel as if it’s that long. Between the drum beats and the string instruments everything comes together quite nicely. While listening to just this track… I can tell that Kraemer wanted to put a lot of bravado into the music for Rogue Nation. Track 2: “Solomon Lane” starts off very low… and then builds up to this amazing crescendo of music. It is a very subtle villain theme at first. Around the 2 minute mark it starts to feel very operatic. The tones are high, and very intense. I’ll say this it isn’t a theme I’d really associate with a villain character. However I think it works for the villain of this film. Track 3: “Good Evening, Mr. Hunt” this is during the record shop scene. When Ethan is trapped inside the listening booth, and he can do nothing to stop Lane from killing the clerk. This is only a 2 minute 37 second track, but it fits the scene like a glove. It builds up to the danger that this villain is. It also instrumentally informs us of how Ethan Hunt is feeling when he can’t save the girl. While watching the film and hearing this piece in the context of the scene, you can clearly tell it pains Ethan, when he can’t complete a mission.

On Track 4: “Escape to Danger” This is yet another example of the entire orchestra building up into the dangerous parts of a scene within the film. Track 5: “Havana to Vienna” has some locally cultured music in it. But then it has what sounds like to me a more military feel to it. There is this undertone or back beat behind the drums. After which we get a very sinister few notes around the 1:20 mark in the track that is 5:14 in length. The percussion on this entire score is so well done. Even just sitting here listening to the score by itself… I can tell exactly what Kraemer was going for with each note.

Track 6: “A Flight at the Opera” opens up with lots of drum beats, and each note takes the wind right out of you. I love how Kraemer is able to weave the M:I theme in and out so fluidly. This entire scene within the film in my opinion really had nothing to do with the Opera performance in the theater that they were at. The opera to me was all the spy stuff going above the stage on the catwalks and other places within the theater. Tracks 8 and 9 are “The Plan” and “It’s Impossible” respectively. With track 8 you get a sound that really builds up the IMF team. As track 8 you also get a sense of danger, but not really any fear. The reason for this I think is because the theme is meant to build them up, and get across the point that they are ready to take on the impossible. Track 9 is very short at 1:24 in length. However it gets the point across and Kraemer uses the M:I theme well at the end of the track.

Track 11: “Morocco Pursuit” NOW THIS IS AMAZING CHASE MUSIC!!! the morocco chase scenes were simply awesome in the film. For one specific reason… it has to do with Ethan and Benji meeting up with Bryant and Luther, but I won’t spoil how it happens. If not for another track later this one might be overall favorite off the entire album. It has everything inside it… the build up to a huge crash scene, the action you know you always want with a Mission Impossible film, and so much more!!! Track 18: “Meet the IMF” is the track I mentioned before that is my number one favorite off this score. This music takes place at the climax of the film, when Lane eventually…. well I won’t spoil it, but damn what an ending. It’s a complete circle for Ethan’s character, and a wonderful way to end the film. Track 19: “Finale and Curtain Call” ends the film, in a good place, and the funny thing is… I’ve been saying M:I-5 has been like an opera the entire way through. Well Kraemer even calls the end theme Curtain Call. Of course we have to end the film with the Mission Impossible them. What a film… what a score!!!

Just when I think the Mission Impossible team can’t go any more off the deep end… just when I think they’ve outdone themselves…. They continue to outdo themselves. I’m very much interested in hearing more from Joe Kraemer in the future.  You can get this score from LA LA Land Records directly! THIS REVIEW WILL SELF DESTRUCT IN 5, 4, 3, 2, 1……….BOOM!!

Joe Kraemer really knew what to do with Mission Impossible Rogue Nation's score. He brought in classic action adventure themes, while crafting dark and sinister tones as well. He really does deserve to be recognized alongside the other Mission Impossible composers. If you have seen M:I-5 and want this music go get it!!! If you haven't seen the film yet, well what are you waiting for? The score rocks and the film kicks ass!!