On March 29th, 2018 BLACK STONE CHERRY WITH PERRY HUTCHINS  was at Joe’s Live Rosemont! My wife Karen had gotten me tickets on my birthday back in February for this show. March 29th has always been special, it was my grandmother’s birthday. My Mom’s Mom was born 3-29-20, and sadly it has been 11 years since she passed. When I first saw this event that was happening near us… I showed Karen, and I told her I’d kill for these tickets.

It was as if my Nana was saying… “Here you go Mikey, go have fun!” Huge thanks to my wife, my best friend, my love to infinity and beyond for this experience! 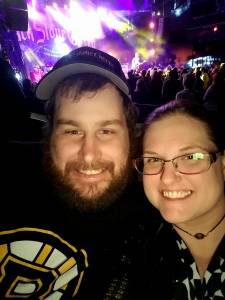 I’ve been a fan of Black Stone Cherry since 2011 when they released Between the Devil and the Deep Blue Sea! I can listen to their music on loop, 24 hours a day…. Just ask my wife, I need BSC to start my day every day to get my ass in gear for the day. So on February 9, 2018… my 38th birthday when she surprised me with the tickets, I was so stoked. I’ve been to many concerts in my lifetime, and the last one I went to was back in 2006. For me getting ready for a concert, especially one that was a month away at the time, this means you play that artist or band’s songs all day and all night. We were there to see Black Stone Cherry, and we were both introduced to the Perry Hutchins band. Perry Hutchins was awesome… Karen and I dug their stuff, and it’s music I’ll be adding to my playlists in the future. One thing she kept pointing out to me, because I could see it from where we were was the bassist of Perry Hutchins doing his thing on the right side of the stage. The man was playing the guitar behind his back, on his knee, and everything in between. 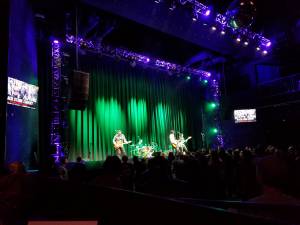 When Chris, Jon, Ben, and John Fred hit the stage, they kicked our asses with the live debut of a new single! Bad Habit is the second single of the then unreleased new album Family Tree. I had heard Bad Habit a few times right before this show, but seeing these four rockers in person is definitely something else. It’s otherworldly how much Ben Wells moves on the stage. Karen said to me, “He’s like a jack rabbit, moving from one end of the stage to the other.” The man ran and jumped around throughout the whole performance that night. I’m sure this is the way Ben is every night, but never having seen BSC before… Oh boy was it a sight to see. 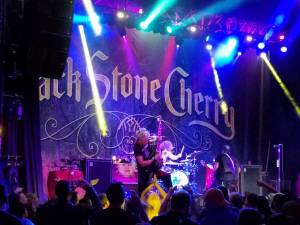 From the hard rock riffs, drums, and vocals in Bad Habit, these artists transition from that to one of their single’s from the album Kentucky. Cheaper to Drink Alone was next up, and this one was another hard rockin’ tune. 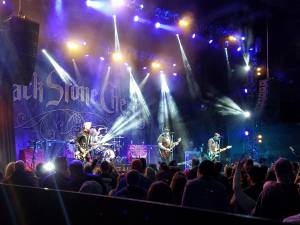 I’ve always loved the album versions of music…. I’ve enjoyed live music, but there have been times when I prefer what’s on the disc more. Black Stone Cherry is the one band I’ve seen in person where there is almost no difference between being live and on CD. I’m not saying this as bad thing, what I mean is BLACK STONE CHERRY LIVE in person sounds like I have them in my house as well as on my speakers. Normally when I’ve been to live shows before it sounds different from what is released on an album. Every song these 4 southern rockers hit us with was just amazing. The show was extremely well put together. Between each song Chris or Ben would talk to the audience as if we were in their backyards back in Edmonton, Kentucky. They infused the set list with stuff they love to do like Foxy Lady, Rock n Roll Fantasy, Can’t You See, and Born Under a Bad Sign. 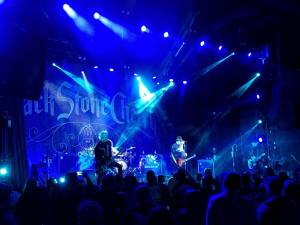 The latter two songs I just mentioned the band has actually covered. Can’t You See is featured on Between the Devil and the Deep Blue Sea, and Born Under a Bad Sign is on the EP Black to Blues! My one hope for this show was to see Built For Comfort live, as that is my #1 track from the Black to Blues EP. 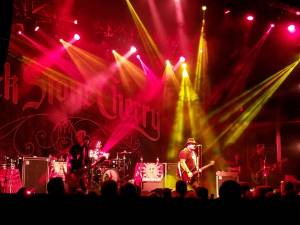 One last thing that I loved about this show… the lighting! The lighting that they used on every song, and even in between each song. It was fun, bright, and fit the band like a glove! 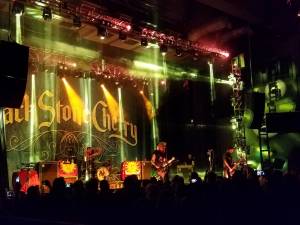 BSC BLEW THE DAMN ROOF OFF of Joe’s! Between John Fred’s drum solo, Ben singing the Eagles hit Take It Easy, and Chris hitting all the notes I love with his voice on every song… 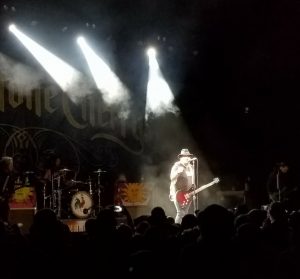 This is a night that I’ll never forget. We took lots of pictures, as you can see, and I even grabbed a BSC hat from the merch table! I was hoping for an advanced copy of the new album, but the guy told me that the record company didn’t even have them yet!

I know this is gonna be sacrilege to a lot of people, but I told my wife after the show that Black Stone Cherry are my version of The Grateful Dead. I want to see every show they do, because the show they put on at Joe’s was fun, rockin’, and just electric. 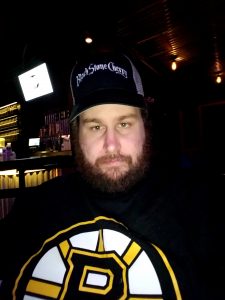 I can’t wait to see them again whenever they are close to where we are living. This is a band I would travel anywhere just to see them. If you haven’t seen BSC live… what the hell are you waiting for? I promise it’s gonna be a blast! Joe’s Live Rosemont was a perfect, almost intimate place to have this show, and as I said before Black Stone Cherry blew the roof off the place. If you are looking for a great rock n roll show, Black Stone Cherry will deliver that. Family Tree has been out now for a month, and I can’t stop listening to it. Be on the lookout for my album review of it here on GCRN tomorrow! 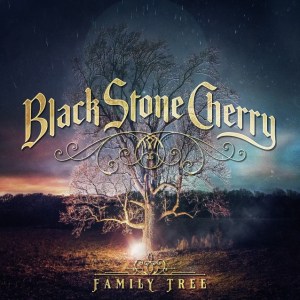 You can get Family Tree at the BLACK STONE CHERRY WEBSITE or on any of the following DIGITAL MUSIC SERVICES!!

FROM THE DESK OF TFG1MIKE! - The ThunderCats are Roaring back AGAIN!