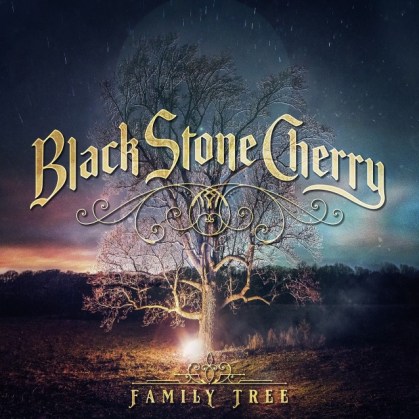 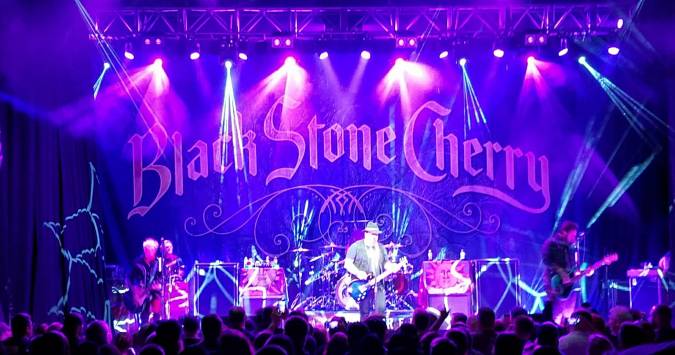 I’ve already written up my CONCERT REVIEW for Black Stone Cherry, and as I said there I’ve been a fan of them since 2011’s album release of Between the Devil and the Deep Blue Sea! With planning for the concert I went back further to the first two albums to catch up on their earlier hits. In the last 2 years BSC has cut out two major albums and an EP. In 2016 they released “Kentucky”, which I absolutely loved, and then last year we get the EP “Black to Blues”!

And now let us climb the “FAMILY TREE”!

Normally I would have bought the album on iTunes, but for the better part of nearly 2 years I’ve been using Spotify. So I had it auto added to my library. In general what I love about BSC’s “Family Tree” is that it’s a combination and fusion of everything that they have done since 2006. This southern rockin’ band has been around for 12 years, and they just keep getting better and better!

Being the lead off track of the album sets the tone. Bad Habit is one rockin’ tune! With sounds that sizzle and lyrics that leave you remembering them… Bad Habit is a Southern Rock tune for the ages. The guitar licks and drum beats knock this song outta the park. At the 1:52 min mark Chris Robertson yells out a screamin’ “oohhhh yeahhh” and then a sweet guitar solo happens with Ben Wells on rhythm guitar, and Jon Lawhon on bass. Not to mention the drum backbeat that John Fred puts in. That solo lasts for nearly a full minute, and I never thought BSC would put something like that in a song, but I should have known better. Bad Habit is gonna be a track all rock fans will listen to as an anthem for years.

Burnin’ was the first single off “Family Tree” Coming off the in your face rock edge Bad Habit has, this song also kicks you in the ass! However it’s more of a hard rock love song. I know that is a thing, but I never thought I could write that description for a Black Stone Cherry song. After all most of their love anthems are a bit slower than this. The instruments, vocals, and lyrics all come together nicely and it gives us our second cut off the record that we will be remembering for a long time.

A New Kinda Feelin’ indeed! This is the first song I throw on when I need to get my ass in gear in the morning. The tune it carries is hard and soft all at the same time. All four members of the band bring something new to each section of the song. Between the guitar licks of Ben and Jon, John Fred’s masterful drumbeats, and of course Chris’s vocals. As the song says, “I’ve got a new kinda feelin’ (If you want it you can’t have it) It’s a perfect kind of healin'” Love that line, because it represents to me that when you experience new feelings they can be healing your soul. This song is an upbeat, rockin’ tune, that gives the listener hope I think.

4. Carry Me On Down The Road

This is my exercise theme song! Anytime I’m out walking, hell even when I’m walking in a grocery store… I have this on my phone at full blast. Don’t look at me like that, there are worse people at Wal-Mart than me. Carry Me On Down The Road might have my favorite tune under the lyrics of the whole album. I love what the guys are bringing to this song instrumentally.

My Last Breath is the first almost slow tune on the record. After the first four batters stepped up and hit home runs, this one feels in line with BSC’s “In My Blood” and “Long Ride”. It’s easily another great tune from the album, and it tells more of a Family story then anything else. That’s another thing to love about Black Stone Cherry, when they write, create, and bring to life the songs that tell emotionally compelling stories.

If “My Last Breath” was the slower anthem rock song of the album, “Southern Fried Friday Night” is definitely the party song. “This is the Country life on Southern Fried Friday Night” That’s just one of the lyrics in the song, and BSC are celebrating partying on down home in Kentucky. This band truly is the current Southern Rock we both deserve and need! Again the licks of the guitars, the beats of the drums, long with the vocals of Robertson… This quartet does an amazing job! A song all about “just what they like”, you have to admit that it’s a catchy tune.

I was not expecting a song with a collaboration on this album, but we have it here. The sad thing is I had to actually look up Warren Haynes. At first I thought he was some young newcomer, but oh boy was I wrong. Between BSC and Warren they kill it on this song. I love the way Chris and Warren’s voices sound together. It’s a very natural collaboration. The instrumental on this this one is beyond rock. It feels as if the guitars and drums are a part of the song’s story. By this I mean that as they are playing… the tones coming from the instruments infuse the story telling of the song. That’s how all music should be.

HEYYY YEAAAHHH!! This is another of my favorite tracks, as most of them are on this album. The line where Chris sings, “Ain’t Nobody got a body like you.” is the ringtone I use for when my wife calls me. BWA HAHAHAHAHAHA! Once again a kick ass rock song, which most of this album is exactly that. BSC has evolved their sound over the years, and it’s turned into a hard southern rock sound, mixing in the tender moments through out.

This is Black Stone Cherry’s testament to James Brown, and damn if it doesn’t feel like the man himself came up with it. That opening soul is just so different for BSC, and it works so well. The way they use the vocals on this track is beyond unique. The guitar solo in the middle kicks the song up past 11.

Sticking with the rhythm and blues atmosphere BSC says that we’ve got the blues. Once again a completely BSC styled song, but with new bluesier tone to it. “The only thing I wanna do is satisfy your soul.” Chris sings as the guitars and drums ring true to being a original blues track for today’s sound.

A more rockin’ tune in this song. It kinda returns back to what the album was before tracks 9 and 10. That isn’t a bad thing though, the cool thing about Family Tree is that there’s rock, rhythm, and blues sound over the whole thing. Chris is singing his heart out here, along with Ben, Jon, and John  Fred playing their hearts out. It has a catchy tune to it, and lyrics that tell a story. That’s one thing I love about BSC, most of their songs… if not all of them tell stories.

As we are coming to the end of the lineup on the album… “Get Me Over You” offers up a sweet tune. Something you can nod your head to, and a sound that just pulls you under. The melodic moments, and the hard riffs in this song are mesmerizing. You won’t be able to get over this song anytime soon.

The title track ends this album. I’m never sure how I feel when a track is also the title of the album. I’m fine when the album title shows up in a song lyrics, but I can never tell where the title track is supposed to come in on some albums. This is just a generalized comment about any musician and album. Sometimes it’s great that it’s the first track, and other times it works well in the middle, or the end. I think in the case of Black Stone Cherry’s Family Tree…. it’s a perfect period on the album. The song itself is a wonderfully done rock tune, but it’s slightly slower. It focuses on the story of the song, with the instruments enhancing it. The crazy thing is this is the track I listen to the least off the album. I’m not sure why.

Family Tree is a stellar addition to the BSC album roster. These four men have kicked in the Southern Rock door over the years, and this just puts one more dent in it. Not just Southern Rock, but Rock in general. I can’t wait to see them again in 2019. Go get Family Tree everyone, it’s an album that you will find yourself going to every day if not every other day. I play at least 5 tracks all day every day, while I’m getting stuff done around the house. As far a a rating I have to give Family Tree a 4.5 stars outta 5, because as I said I like almost all the tracks. However there are 5 or 6 I listen to more than others.

You can get FAMILY TREE on iTunes, Spotify, and the BSC Website!