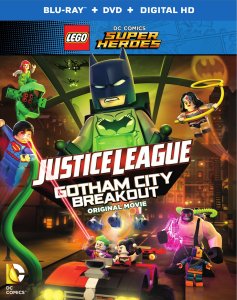 THE JUSTICE LEAGUE DISCOVERS THE DIFFICULTY IN

AND THE LEGO GROUP RELEASE

BURBANK, CA (April 14, 2016) – Fighting crime is a full-time job and Batman NEVER takes a vacation. That is until he finally agrees to let Batgirl and Nightwing take him on a long overdue trip – leaving Gotham City under the watchful eye of the Justice League in LEGO® DC Comics Super Heroes – Justice League: Gotham City Breakout. Produced by Warner Bros. Animation, DC Entertainment and the LEGO® Group, the film will be distributed by Warner Bros. Home Entertainment on on July 12, 2016 on Blu-rayTM Combo Pack, DVD and Digital HD. The Blu-rayTM and DVD releases will include an exclusive Nightwing LEGO® figurine, while supplies last.

When Batgirl and Nightwing take Batman on a trip down memory lane – literally – to visit one of the key mentors from his formative years, it’s up to the Justice League to keep Gotham City crime-free. But neither situation proves to be a “vacation” as the Bat trio encounters old nemeses on their adventure, and the Justice League discovers just how busy Batman is on a regular basis. It’s a brick-tastic battle on two fronts as Batman, Batgirl and Nightwing take on Bane and Deathstroke, while the Justice League – with some help from a few Teen Titans – fends off an assault by many of Batman’s infamous adversaries to ensure Gotham City’s safety.

ABOUT DIGITAL HD WITH ULTRAVIOLET

About The LEGO® Group

The LEGO Group is a privately held, family-owned company with headquarters in Billund, Denmark, and main offices in Enfield, USA, London, UK., Shanghai, China, and Singapore. Founded in 1932 by Ole Kirk Kristiansen, and based on the iconic LEGO® brick, it is one of the world’s leading manufacturers of play materials.

Guided by the company spirit: “Only the best is good enough”, the company is committed to the development of children and aims to inspire and develop the builders of tomorrow through creative play and learning. LEGO products are sold worldwide and can be virtually explored at www.LEGO.com.

For more news from the LEGO Group, information about our financial performance and responsibility engagement, please visit https://www.LEGO.com/aboutus.

JUSTICE LEAGUE and all related characters and elements are trademarks of and © DC Comics.

DC Entertainment, home to iconic brands DC Comics (Superman, Batman, Green Lantern, Wonder Woman, The Flash, etc.), Vertigo (Sandman, Fables, etc.) and MAD, is the creative division charged with strategically integrating across Warner Bros. and Time Warner.  DC Entertainment works in concert with many key Warner Bros. divisions to unleash its stories and characters across all media, including but not limited to film, television, consumer products, home entertainment, and interactive games.  Publishing thousands of comic books, graphic novels and magazines each year, DC Entertainment is one of the largest English-language publishers of comics in the world.

The MPAA Accepts “R” Rating For Batman: The Killing Joke