We proudly announce our Comic-Con World Premiere Soundtracks, available at the Con…! 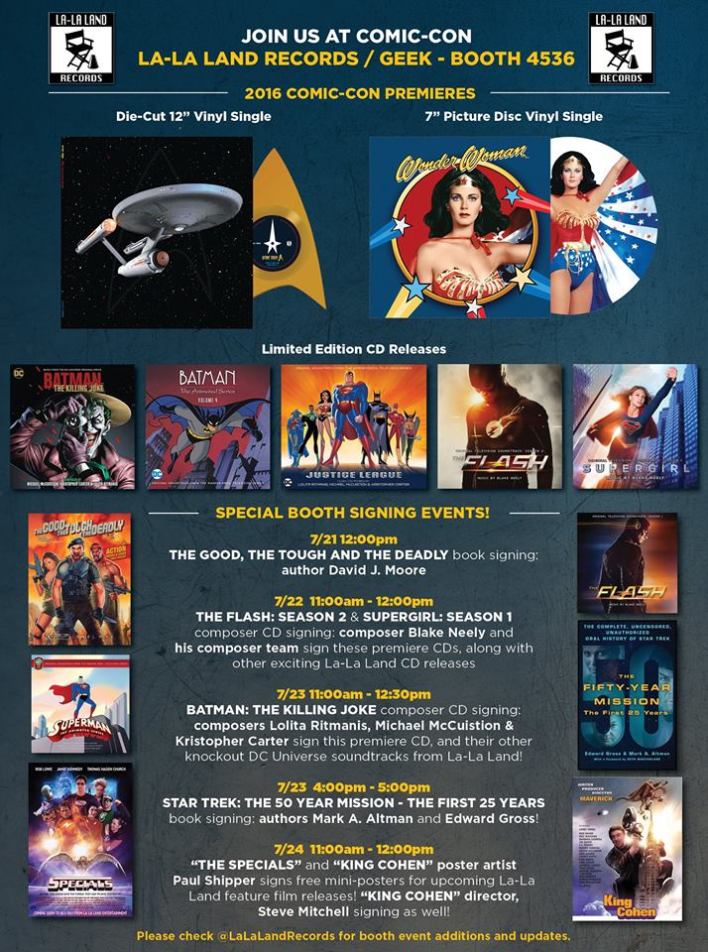 WONDER WOMAN 75th ANNIVERSARY 7’’ Picture Disc Vinyl Single! To commemorate 75 years of Wonder Woman, we showcase the legendary 1970’s TV incarnation of the iconic character as portrayed by Lynda Carter, presenting the season 1 and season 3 main titles on a 7’’ vinyl picture disc, featuring Diana Prince on one side, and Wonder Woman on the other – housed in a colorful jacket. Limited Edition of 1000 units!

ARROW / THE FLASH CD Signing! Composer Blake Neely will be signing copies of his THE FLASH and ARROW CD soundtracks and more, purchased at our booth. Fri 7/22 at 12pm.

BATMAN: THE KILLING JOKE CD Signing! The Killing Joke composers, Lolita Ritmanis, Michael McCuistion and Kristopher Carter, will be signing copies of the Killing Joke CD, (and their other amazing soundtrack titles), purchased at our booth. Sat 7/23 11am-12:30pm.

FEMME FATALES Signing! Meet actresses from the cult-noir Cinemax Series and get DVDs of the show purchased at the booth autographed.

Visit us at the show, Booth 4536, or check @LaLaLandRecords for to-be-announced signing days/times.