The Beloved Franchises Collide in Celebration of Their 35th Anniversaries

SAN DIEGO, CA (February 20, 2019) – Spinning out of the mind-blowing reveal that a Transformers-Ghostbusters™ Collaborative figure, the ECTO-1 ECTOTRON, will be available, IDW Publishing proudly announces that the beloved franchises will unite for an offbeat, out-of-this-world adventure in Transformers / Ghostbusters, a comic book miniseries debuting in June.

In the first chapter of the “Ghost of Cybertron” storyline, the Autobots – having escaped from the war that destroyed their home planet – trace a stray Cybertronian signal to the planet Earth. Investigating the otherworldly source will bring the Robots in Disguise face-to-face with the renowned professionals of paranormal investigation and elimination: Venkman, Spengler, Stantz, and Zeddmore!

“If you are troubled by strange noises in the middle of the night, or if you or any of your family have ever seen a Decepticon in your basement or attic, don’t wait another minute: this is the crossover series for you,” says Michael Kelly, Hasbro’s Vice President of Global Publishing. 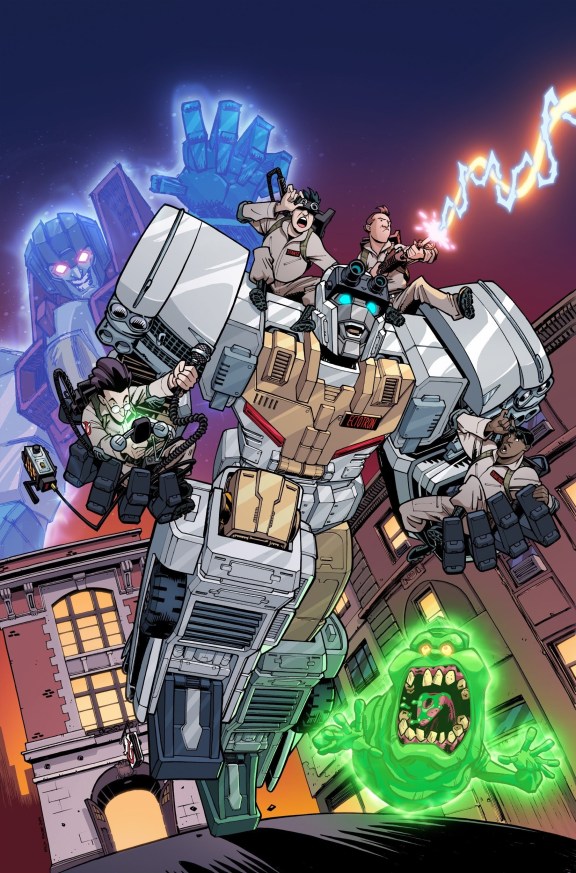 The team-up that has been three-and-a-half decades in the making will tie in directly to the announced toy release, featuring appearances by the new Transformers character ECTOTRON… as well as yet-to-be-revealed crossover surprises that are sure to cause mass hysteria in both fandoms.

“1984 was a seismic shift for entertainment, the year that launched both Transformers and Ghostbusters,” says John Barber, IDW Editor-in-Chief. “Back then, Little John Barber was right there for Transformers and a little scared of Ghostbusters — but now, I’m a bit braver and can’t wait to see the two worlds collide. Seriously, it’s amazing to think that these sets of characters would be more alive and relevant in 2019 than ever before… and will be coming together in an unprecedented way right here at IDW!”

For information on how to secure copies celebrating the Transformers / Ghostbusters, please contact your local comic shop or visit www.comicshoplocator.com to find a store near you.

TRANSFORMERS and all related characters are trademarks of Hasbro and are used with permission. © 2019 Hasbro. All Rights Reserved. Licensed by Hasbro.

About Hasbro, Inc.
Hasbro (NASDAQ: HAS) is a global play and entertainment company committed to Creating the World’s Best Play Experiences. From toys and games to television, movies, digital gaming and consumer products, Hasbro offers a variety of ways for audiences to experience its iconic brands, including NERF, MY LITTLE PONY, TRANSFORMERS, PLAY-DOH, MONOPOLY, BABY ALIVE and MAGIC: THE GATHERING, as well as premier partner brands. Through its entertainment labels, Allspark Pictures and Allspark Animation, the Company is building its brands globally through great storytelling and content on all screens. Hasbro is committed to making the world a better place for children and their families through corporate social responsibility and philanthropy. Hasbro ranked No. 5 on the 2018 100 Best Corporate Citizens list by CR Magazine, and has been named one of the World’s Most Ethical Companies® by Ethisphere Institute for the past seven years. Learn more at www.hasbro.com, and follow us on Twitter (@Hasbro) and Instagram (@Hasbro).