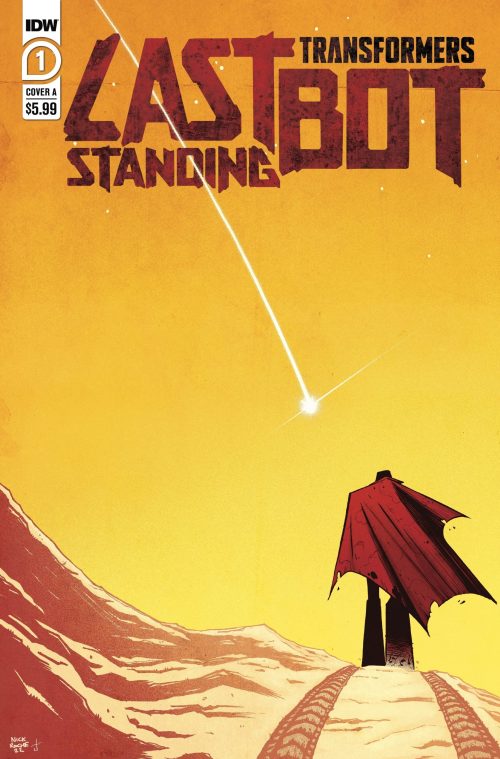 Behold A Dark Vision of A Hypothetical Future…
Where Only One Ancient, Haunted Cybertronian Remains!

SAN DIEGO, CA (February 17, 2022) – When the last stars flicker and fade, who will be the only Cybertronian left? Beginning this May, IDW Publishing propels fans into the far-flung future with Transformers: Last Bot Standing, a four-issue miniseries spectacle of speculative fiction by fan-favorite Transformers comic alums Nick Roche and E.J. Su!

While the war for Cybertron may be long over, the war from Cybertron never ends! On the edge of the universe, at the end of time, hangs the planet Donnokt…a world on the precipice of an industrial revolution, taking its first steps into the realms of the mechanical. But when a visitor—a shape-shifting robot from a long-dead civilization—falls from the sky, nothing will ever be the same!

“The last remaining Cybertronian, stalked by the sins of their entire race, must save the world one final time,” says Roche, the series writer who will also contribute some of the interior artwork. “In a way, Last Bot Standing is a proper farewell, as our creative team bows out of IDW’s Transformers universe in the most explosive and apocalyptic way imaginable. To have E.J. Su, the visual architect of IDW’s definitive Transformers run, be the one to depict ‘The End of All Things’ (with colors from the astounding Rebecca Nalty) is the most perfect and bittersweet piece of artistic casting I could think of.”

“The Transformers franchise has come a long way since we laid our eyes on the first episode of the cartoon, and it’s amazing how many writers can put so many different spins on the core characters,” says artist Su. “Nick has masterfully crafted some of the most memorable Transformers comic stories, and this one will be no exception as the readers weave their way through the mystery and find out how our beloved characters came to this situation. We hope that they enjoy it as much as we have enjoyed making it.”

“Like Teenage Mutant Ninja Turtles: The Last Ronin, Last Bot Standing is one of those great stories where defining creators come together to tell one incredible version of an ending, a hypothetical last story for our beloved heroes and villains,” says editor David Mariotte. “We’re so excited to have two of the first IDW Transformers creators return to tell a story unlike literally any Transformers story you’ve ever seen or we’ve ever done.”

Transformers: Last Bot Standing #1 will be available with two cover variants for retailers and fans to enjoy. The primary cover will see series writer Roche performing double duty as the artist, while a Retailer Incentive edition will feature illustration by series artist E.J. Su.

For information on how to acquire Transformers comics and graphic novels from IDW, please contact your local comic shop or visit www.comicshoplocator.com to find a store near you.

About Hasbro
Hasbro (NASDAQ: HAS) is a global play and entertainment company committed to making the world a better place for all children, fans and families. Hasbro delivers immersive brand experiences for global audiences through consumer products, including toys and games; entertainment through eOne, its independent studio; and gaming, led by the team at Wizards of the Coast, an award-winning developer of tabletop and digital games best known for fantasy franchises MAGIC: THE GATHERING and DUNGEONS & DRAGONS.

The company’s unparalleled portfolio of approximately 1,500 brands includes MAGIC: THE GATHERING, NERF, MY LITTLE PONY, TRANSFORMERS, PLAY-DOH, MONOPOLY, BABY ALIVE, DUNGEONS & DRAGONS, POWER RANGERS, PEPPA PIG and PJ MASKS, as well as premier partner brands. For the past decade, Hasbro has been consistently recognized for its corporate citizenship, including being named one of the 100 Best Corporate Citizens by 3BL Media and one of the World’s Most Ethical Companies by Ethisphere Institute. Important business and brand updates are routinely shared on our Investor Relations website, Newsroom and social channels (@Hasbro on Twitter, Instagram, Facebook and LinkedIn.)

About Transformers
The TRANSFORMERS brand is a global powerhouse franchise with millions of fans around the world. Since 1984, the battle between the Autobots and Decepticons has come to life in movies, TV shows, comic books, innovative toys, and digital media, bringing incredible “MORE THAN MEETS THE EYE” experiences to fans of all ages. The brand’s enduring connection is made possible by its rich storytelling and characters: the heroic Autobots who seek to protect all life, and the evil Decepticons who seek to conquer the universe. The TRANSFORMERS brand is a Hasbro franchise.