THE FLASH:
THE COMPLETE SECOND SEASON

BURBANK, CA (May 31, 2016) – Just in time for the third season premiere of the #1 show on The CW, catch (if you can) the release of The Flash: The Complete Second Season as Warner Bros. Home Entertainment releases the next installment of the series on Blu-ray (including Digital HD) and DVD on September 6, 2016. Fans will be able to watch all 23 electrifying episodes from the second season, as well as the Arrow crossover episode, plus three hours of extra content, including behind-the-scenes featurettes, deleted scenes, and a gag reel. The Flash: The Complete Second Season is priced to own at $49.99 SRP for the DVD and $54.97 SRP for the Blu-ray.

Last season, the S.T.A.R. Labs Particle Accelerator exploded, creating a dark matter storm that struck forensic scientist Barry Allen – bestowing him with super-speed and making him the fastest man alive. But Barry wasn’t the only person who was given extraordinary abilities that night. The dark matter also created meta-humans…many of whom have wreaked havoc on the city. With the help of the S.T.A.R Labs team, Caitlin Snow, Cisco Ramon and Dr. Harrison Wells, Barry protects the people of Central City from these powerful new threats as The Flash. Following the defeat of Allen’s arch-nemesis Eobard Thawne (aka the Reverse-Flash), Team Flash must quickly turn their attention to the Singularity left swirling high above Central City, consuming everything in its path. Not only is the Singularity threatening the city with impending doom, but it’s also opened up a gateway to a parallel universe – a world where Barry Allen may not be the fastest man alive; but instead an unstoppable villain known as Zoom.

With Blu-ray’s unsurpassed picture and sound, The Flash: The Complete Second Season Blu-ray release will include 1080p Full HD Video with DTS-HD Master Audio for English 5.1. The 4-disc Blu-ray will feature a high-definition Blu-ray and a Digital HD copy of all 23 episodes from season one, as well as the Arrow crossover episode. 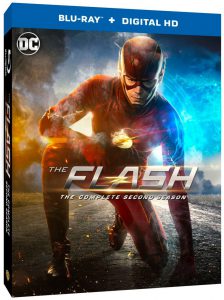 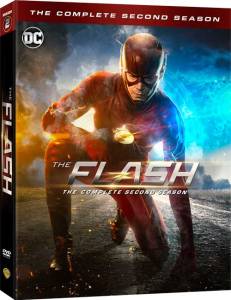 About DC Entertainment
DC Entertainment, home to iconic brands DC (Superman, Batman, Green Lantern, Wonder Woman, The Flash, etc.), Vertigo (Sandman, Fables, etc.) and MAD, is the creative division charged with strategically integrating across Warner Bros. and Time Warner. DC Entertainment works in concert with many key Warner Bros. divisions to unleash its stories and characters across all media, including but not limited to film, television, consumer products, home entertainment, and interactive games. Publishing thousands of comic books, graphic novels and magazines each year, DC Entertainment is one of the largest English-language publishers of comics in the world. THE FLASH and all related characters and elements are trademarks of and (c) DC Comics.