THE TRANSFORMERS –THE MOVIE

FROM A BRAND-NEW 4K TRANSFER OF ORIGINAL FILM ELEMENTS

and Debuts for the First Time on Blu-ray™!

Experience the enormously popular animated feature The TRANSFORMERS – THE MOVIE like never before! In celebration of the film’s 30th anniversary, The TRANSFORMERS – THE MOVIE has been meticulously restored and remastered from a spectacular brand-new 4K transfer of the original 35mm film elements. Fans now can immerse themselves in this thrilling animated adventure with stunning picture quality for optimal home entertainment experience. 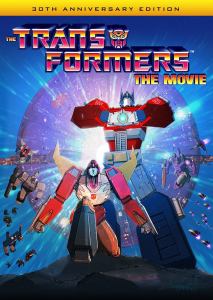 Available at Amazon and in stores at select retail locations

The AUTOBOTS, led by the heroic OPTIMUS PRIME, prepare to make a daring attempt to retake their planet from the evil forces of MEGATRON and the DECEPTICONS. Unknown to both sides, a menacing force is heading their way – UNICRON. The only hope of stopping UNICRON lies within the Matrix of Leadership and the AUTOBOT who can rise up and use its power to light their darkest hour.   Will the AUTOBOTS be able to save their native planet from destruction or will the DECEPTICONS reign supreme?

Hasbro (NASDAQ: HAS) is a global company committed to Creating the World’s Best Play Experiences by leveraging its beloved brands, including LITTLEST PET SHOP, MAGIC: THE GATHERING, MONOPOLY, MY LITTLE PONY, NERF, PLAY-DOH and TRANSFORMERS, and premier partner brands. From toys and games, television programming, motion pictures, digital gaming and consumer product licensing, Hasbro fulfills the fundamental need for play and connection with children and families around the world. The Company’s Hasbro Studios and its film label, Allspark Pictures, create entertainment brand-driven storytelling across mediums, including television, film, digital and more. Through the company’s commitment to corporate social responsibility, including philanthropy, Hasbro is helping to build a safe and sustainable world and to positively impact the lives of millions of children and families. Learn more at www.hasbro.com, and follow us on Twitter (@Hasbro & @HasbroNews) and Instagram (@Hasbro).

Escape from the Aliens in Outer Space Ultimate Edition: A Review