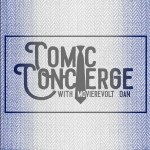 On this episode of the Comic Concierge, I speak with Matthew Stewart from Simplistic Reviews about the creepy horror comic Harrow County. We talk about Matt’s previous experience with comics back in the Image heyday of the 1990’s and why he has moved away from comics since. A great discussion about one of today’s best comics.