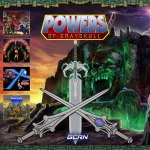 EDITORS NOTE: It was BOTH Lou Scheimer and Alan Oppenheimer as the narrator throughout the 5 part intros and outros!

In Episode 47 of the Powers of Grayskull Series we start discovering the Myths of Etheria! This week we enter Etheria for the next 35 episodes of the POGS podcast. This is a very special episode where OptimusSolo and TFG1Mike break down the differences between the film and tv versions of The Secret of the Sword aka The Sword of She-Ra! We point out the differences that most interest us from Into Etheria, Beast Island, She-Ra Unchained, Reunions, and The Battle for Brightmoon! After that we give you an idea of how Myths of Etheria will be produced and more. So for the Honor of Grayskull you have the power to join us on this new journey into the world of the Princess of Power! FOR THE HONOR OF GRAYSKULL WE HAVE THE POWER!!!!

UNLEASH THE MOTU GEEK IN YOU!!