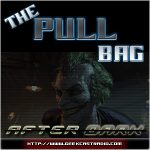 EDITOR’S NOTE: YES We know there are more important things to be paying attention to right now in the world…. however this whole thing effects this podcast! In Episode 473 of The Pull Bag we go AFTER DARK!! As The Amazon Comixology merger has been finalized. TFG2Mike brings in Ryan The UnEvenFlow, Nicholas Finch, and Ladywreck to give their opinions on how bad this amazon merger is. As always Make Your Great Escape Into Comics……maybe?

WHERE TO FIND YOUR COMIX ON Amazon!

TPB Asks You: What will you miss about Comixology Classic?