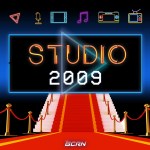 In Episode 036 of Studio 2009 join TFG1Mike and Ryan The UnEvenFlow as they celebrate 20 Years of The first FX Networks original shows The Shield!!! They are discussing Season 1 of 7 of this ground breaking television show starring Michael Chiklis, Benito Martinez, CCH Pounder, and more! We are talkin’ TV! This podcast exists because of listeners like you!!!!

The Studio Asks You: What do you remember of The Shield?

We Expel Our Non Transformative Functions!!!