We return for another filled post of progress here. This time we’ll break down more of what I’ve done. Specifically the chest components and the first round of paint AFTER the hard work of the chest molding. Let’s get to it. FYI, some of this was written on various forums and so the content might not be written as if I’d done it yet.

Little progress working on molding the chest. Decided to skip the Gundam chest I was looking at. I looked at the sizing and they’re all too small even at the 1/144 scale. I picked one up to test the size and it was much smaller than expected. So since I am not a 3D modeler and don’t have the funds to have one made, I am going to try to cobble down a CW Leader Skywarp chest piece, cut it to fit, and attach it to the Galvatron chest piece. Then once it fits the chest piece, I can remold the front to look closer without the weird owl/bird face that shows up by squaring it off more. I almost like this as an updated version of the character model.

My other option is to get a Reissue HM Chromedome and remove the chest piece and place it over top of the Galvatron chest which will be slightly smaller but can get the same effect. Below are the images with and without milliput added as an example. One thing of note is how much his chest sticks out in robot mode. And the fact he CANNOT transform with this attached.

Based on where the hinge is for attaching to his neck portion, it won’t have a way to attach. The shoulders I was kinda thinking that but need to find something that can add on to it.

Although I could attempt the chest of G2 Ramjet since it has proportions that might work. I may go the route of a Chromedome for the chest coverage though. I will see if I can safely get Galvatron’s chest off and see if I can mod the mechanism onto the figure with milliput. I’m thinking on the towers now.

As for the chest plate, I painted it the first coat to see what it looks like on the figure once dried. However… I discovered that the locking latch for that Skywarp’s legs from the torso actually makes the same shape as the middle of the sternum on this Megatron. Likewise, the flaps that go over part of the top of the chest, when cut are the same shape as the green windows on the chest of Megatron.

So my idea would eliminate the bulky chest I had planned with the Skywarp chest. I would just need to glue the portions together and use milliput on Galvatron’s existing chest to flatten the curved portions out to accommodate the pieces. I think it will give much better results for less bulk and allow for the chest portion to still move and not look so top-heavy. Will work on it likely late tomorrow or portions of Sunday with further updates. 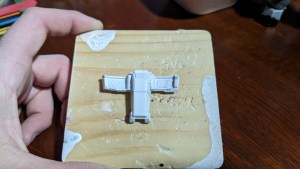 Brief update. The other chest looked wacky and stuck out too much. So I used the parts I mentioned and crafted the pieces, glued them, and primed them. Now I put the milliput around and beneath it. Once it hardens, however, I plan to trim it, sand it, and then prime that section. It sits perfectly on the Galvatron chest and sticks out only slightly more than it did before. I’ll work on molding the shoulders some later this week but the chest I want to finish first.

So after a little while, I looked at it and decided it needed better structure and shape so although I sanded it, I had to remold it too and fill in some gaps. Additional molding, and some primer shot on there. Next I work on painting this guy. The results and primed version of it are below.

Stay tuned for the next post in Part 3 where there will be some painted progress!

The Mega Customs of Steve Megatron!