We return for week three here on the Kitbash arena called, Megatron’s Altered Targets. In this edition, we’ll be covering the paint work of this particular figure and with any luck, good work. I had a difficult time painting this and also waiting the time to let this set. The green didn’t want to go on well, and the purple looks smeared which I am working on but I don’t dislike what’s progressed so far. I have a long way to go. With the back, this is technically flat on the robot mode whereas Galvatron isn’t. That being said, I am being creative with that license there on color and design. But the cannon is done, and most of the chest. Now it’s repainting the rest of the figure and the head.

Here we have the results of the chest. Got some paintwork done up now in places. Need to still touch up the green light areas as the paint goes on super thin there. Added some metallic dark gray, some glossy grape (I think), and a few detail spots but it’s coming along now. 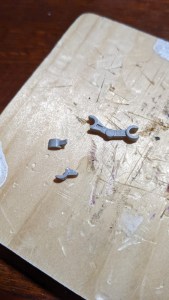 For the silver lines attached to the pin at the top of the new chest, I took a lego droid arm and heavily chopped it and painted silver for when I am done painting the main figure and can attach it.

The smaller portions will attach to that area of the figure creating that silver portion in the middle. I plan to use this once I put a 2nd coat on the figure to make it pop more. I don’t want to risk these as it’s the silver components attached to the chest.

Meanwhile there are other portions I’ve been working on with various states of silver, purple and graphite metallic Testors paints.

So this was originally planned to have a Kingdom Beast Megatron or a T-Wrecks head. However the one I was waiting on never materialized due to USPS incompetence losing it. If I end up seeing it, I’ll update with a 2nd head. However I had a great member of the Allspark Discord channel send me this OG 1996 Beast Wars Megatron head. Yes, it’s slightly larger than expected but it’s a head and I am thankful it will work out.

I had to add the milliput to the openings in the back of the head due to the mutant face bat wings location. It filled in just fine and although it’s a little rough on the sides, it’s fine. Battle Damage lol. But the design works and I had to carve out the neck joint. For those who don’t know, the neck joints were attached to older toys whereas the WFC line has them attached to the torso mostly. So I had to chisel that off but not too much to fit the new neck component on Galvatron. Then I painted to match the image.

The benefit of the red metallic color was that it coated the orange-ish eyes and gave it a glowing effect. I repainted the silver and added the grape purple gloss for the face and the graphite metallic for the rest of the head surround. I do intend to blend a color or two to make the iris of the eyes. I started it with a different shade of the red and dry brushed it. While it does show some of it, there is the potential to make it better.

Well, that’s all I have for now. Stay tuned for more updates in Part 4!