Luke Cage marks the third original Marvel series to appear on Netflix and considering the past success of both Daredevil and Jessica Jones the anticipation for its release is rather high. One episode in and it is already looking like Cage is another solid entry into the world of the ever expanding Marvel Universe.

People often point to the fact that each Marvel film now tends to take on a genre and simply add in superhero elements.  For example Ant-Man takes on the properties of your basic heist film, and Captain America: Winter Solider is chalk full of story elements often found in spy thrillers. The Netflix series have been able to differentiate themselves in a different way. Being extended series they find their identity in more subtle ways in both their tones and visual style.

For example much of Daredevil’s identity is found in its impressive fight choreography and brutal violence. It’s like Johnnie To action crime thriller with the down to earth reality of The Raid series. On  other hand theJessica Jones has a pulpy neo noir atmosphere and sultry sex appeal.  Out of all of Marvel’s properties it may also tackle some of the heaviest subject matter.

Luke Cage on the other takes on the personality of its titular character—a mood that is understated like a smooth jazz ballad waiting for the right moment to explode. The hip-hop influence immediately make themselves known. Perhaps for the first time a Marvel studio production has music playing a key role in nearly every scene. It is on the forefront often saying more than the actual spoken dialog.

That is not surprising considering A Tribe Called Quest’s Ali Shaheed Muhammad has signed on as musical supervisor alongside musician Adrian Younge. Both had worked together previously and their experience and talent is already paying off.  This was as joyful to listen to as Daredevil was to look at when it change the game with its level of stunt coordination. Imagine taking Empire and The Wire combining them into one and adding superpowers. Doing so would give you something close to Luke Cage.

Overall ‘Moment of Truth’ is a methodically paced episode designed simply to set the stage and introduce the major characters. Right of the bat the series shows it will be heavily anchored in the Harlem community and culture. Some may argue starting off in a Barbershop on a debate about basketball is somewhat of a clichéd choice. While I cannot argue it is oozing in originality the overall execution made up for that drawback. We got to see Luke Cage in his element outside of what we saw from in Jessica Jones.

Also for the first time a Marvel TV Show/Movie is tackling the element of race. That was not uncommon for a Luke Cage comic, however it is s a delicate story element to get right. Considering its serious nature it can become out of place when you are bring that subject matter to a superhero TV show. It’s not that it can’t be done it simply needs to be done with tact and elegance. So far that has occurred.

Before the series began I was concerned over whether Mike Colter could carry a show by himself. I liked what I saw of him in Jessica Jones, but I worried it was too timid to be an appealing leading character. I am happy to report I was very wrong as we see many sides of Colter in this first hour. He has an instant presence to him that draws in you scene to scene. Every action feels deliberate and considering his strength that makes sense. In order to blend in he needs to restrain himself at every turn.  That struggle is a constant battle for him.

To start we see Luke is not in the greatest place in the world. He is late on his rent and working two dead on jobs. These series continue to make the right choice by not getting bogged down telling us the origin story right off the bat. We get some background on his past and some extremely brief flashbacks. Overall though this is a story about the here and now.

In the here and now Harlem is being ruled by a few forces most notably a crime boss nick named Cotton Mouth. Mahershala Ali plays Cornell Stokes aka Cotton Mouth  unlike any villain Marvel has had yet. To make another reference to The Wire I felt like I was watching what would happen if you made Stringer Bell and Avon Barksdale into one character. He knows how to play all the games including the political ones like Stringer Bell, but he also show his forceful side like Barksdale.

Being a Marvel property and knowing The Defenders is on its way fans will surely be on the look at for ties to other parts of the Marvel world. Not surprisingly a William Fisk reference gets dropped as a cautionary tale of what can occur if you get caught playing the gangster game. What was surprising was seeing a call back to Justin Hammer as a major buy of some of illegal arms is going down. It was the right call to use Hammer’s name rather than Tony Stark’s. Considering the tone of the show hearing Stark’s name directly referenced can somewhat take you out. Hammer on the other hand will probably go over many people’s heads and his weapons do seem more likely to end up with people who should not have them. 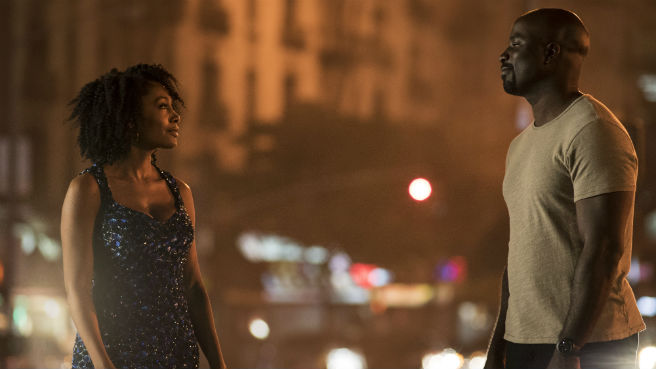 This buy does not go as planned and Cotton Mouth’s money gets stolen. One can assume this is the event that will set the story motion as those that held up the buy have connections to both Luke and his Mentor/Boss Pop. Cotton Mouth is angry and looking for revenge and his money.

Simone Missick also makes her debut as the character Misty Knight. So far she seems to only resemble the comic character in name only. She is not a glorified Pam Grier character rather she is a full on serious detective. When we meet her she is playing the undercover game staking out Cotton Mouth’s club. This leads to what is my only major issue with this first episode as the interaction between Cage and Knight lacked the chemistry it needed. What was meant to be a flirty interaction was stiff and wooden.  The words were there as well as the looks but for some reason neither had a great deal of chemistry.

Having a season to tell your story lets these creators to take their time and allow us to understand these characters before diving head first into the action. The only fight that occurs here really is reserved for the very end. The sequence itself works wonderfully and shows how this style of action will differ from Daredevil and Jessica Jones.  It did come off as a sequence that was put in simply because they felt they needed to have one to meet expectations and sooth those who were bored with the lack of punching.

Overall episode one starts off strong. The gripes are small in both amount and overall impact, and what works is both fresh and intriguing. It is one of those episodes that   makes you happy Netflix drops the entire series at once because you know you will be sticking around for the next episode immediately.