If there was ever a time or even a week that we needed escape it was this one. Despite the chaos in the world we can depend on comics to brighten our day. This week in comics had a number of those moments I wanted to highlight. I chose some of the panels that stood out to me the most this week.

I do try to not include anything that would majority spoil anything. However, to be safe the following books are included below: 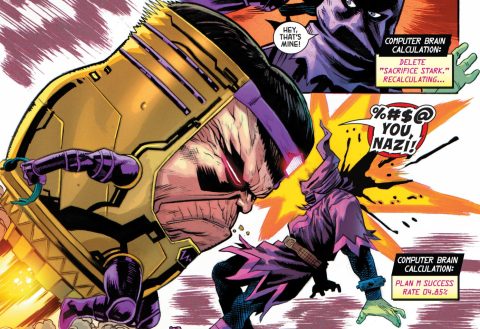 I cannot lie this panel was something I needed to read this week. Well, most of us needed. Seeing M.O.D.O.K. headbutt a nazi was cathartic with the events of this past week. This may not have the same legacy of Captain America punching Hitler, but it’s certainly a welcome sight. One a pure artistic perspective it is a nicely put together panel. Good use of motion lines and cartooning to sell the impact of the smashing. Then that lettering helps sell the humor. Even without the insanity of current events, this is a really fun panel. 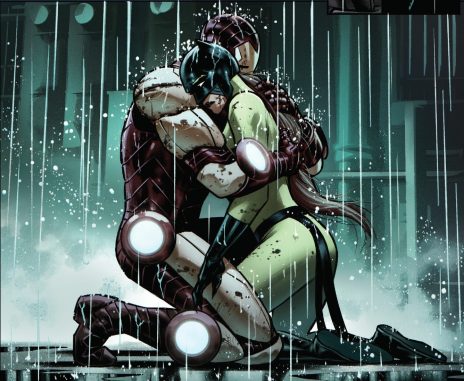 I do not know if this scene plays as well out of context as it did at the moment. This run of Iron Man thus far has been going hard at the character of Tony Stark. In a way that does not hold back its criticism of some of his more problematic traits, but also pushes him to be more. At the center of that was this kinship between Stark and Patsy Walker. Patsy has been the catalyst to Stark’s development and in these last few issues, she has had her own personal challenges. This scene was those two journies conversing into one. Using rain to highlight emotion may be cliche’ but it still works. The body language of Hellcat says so much as well. A small moment of human connection. Something that gives meaning in between all the punching.

When you are a comic about comics you need to find a way to sell that idea. Of course, Crossover has used references and actual comic characters to make this concept come to life. For me what has been a bit more impressive has been the artistic flourishes it has used. For example the different coloring techniques. Utilizing old school dots to distinguish between the general population and the out of dimension characters. You see that technique used here. Along with contrasting the splash of color with black and white. This leads to a well-staged scene that starts things off in an exciting manner. Seemingly to symbolize we leaving behind what we once thought to experience something new and unprecedented. 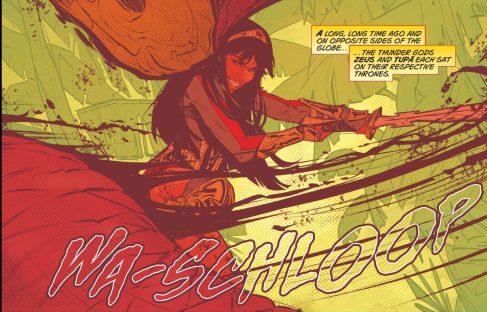 Putting Joëlle Jones on a new Wonder Woman comic was a smart move. When you reading series like Lady Killer you know how well she can stage and execute action scenes. Being a DC series I was wondering if she would be able to showcase a similar level of violence. This panel is an example of how they rode that line. Love the colors here.. Not a surprise because Jordie Bellaire is doing them. Her style and Jone’s mesh so well. Not just the color choice but this is how you highlight what is important. Red and green can apparently work together even after Christmas. Pitch perfect facial expression as well. That is the face of a warrior who enjoys the hunt. 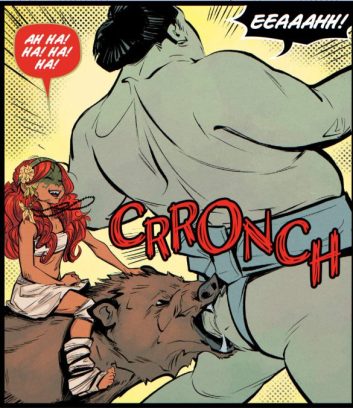 Sure someone getting bit in the but is a bit sophomoric. I would not argue this was one of the most elegant moments in comics this week. Sometimes you need things to be a bit silly. These are the funny books after all. That warthog gets a good chunk in that bite too. A type of bite that you can feel. Moments like this gave this issue a major personality. Also major points for using mythological characters from Brazilian culture. I had no idea who Caipora was before this comic and now I want to know more. It is nice to see more than just Greek gods once again. 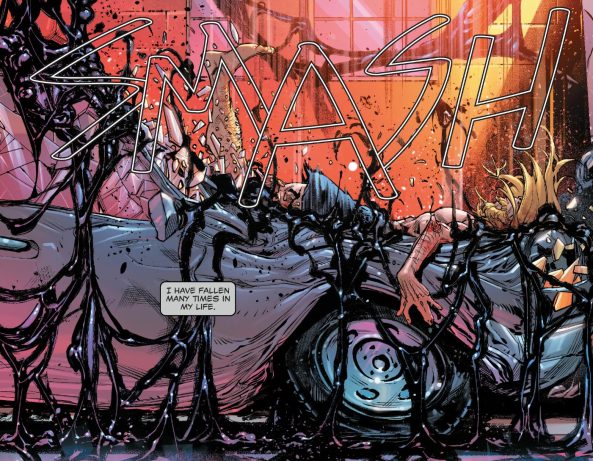 This panel was all about impact. That impact comes in a few ways. Starting with the physical impact that is demonstrated with this image. When you look at this panel you can see the weight and force. Even that ‘SMASH” adds a coda of destruction to all the chaos. Eddie Brock’s body is all distorted to show this was a situation where nothing broke his fall.  Even the black gooey symbiote operates as a replacement for blood. Beyond that is how this impacts the overall quality of the comic. One of the things I think is missing from a lot of comics today is opening on a key image that grabs your attention. Being the first panel you see this starts off with a smash. (Sorry for the pun) . 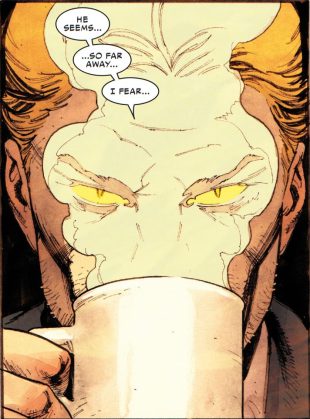 This is another panel that works even better in the context of the page.  A book about galactic level gods found its biggest moment of suspension inside of a gentle dinner between supposed friends. It comes out of nowhere just to remind you of the mental state of this Donald Blake. Less can be more. By simply changing the color of eyes you can make a person look like the personification of evil. Using the steam of coffee to operates as hellish smoke was a nice touch as well.

I was not the biggest fan of the man story in Future State: Superman of Metropolis #1, however, the backups had some moments. Specifically, the one focusing on the new Mister Miracle. This panel was the highlight of that highlight. Those glowing white circles on top these massive machine gives me major War of the Worlds vibes.  I am also a sucker for hero shots like this. One person standing against the odds to hold back the evil sent to do harm to others. This was something nice to see at least in the pages of comics this week. 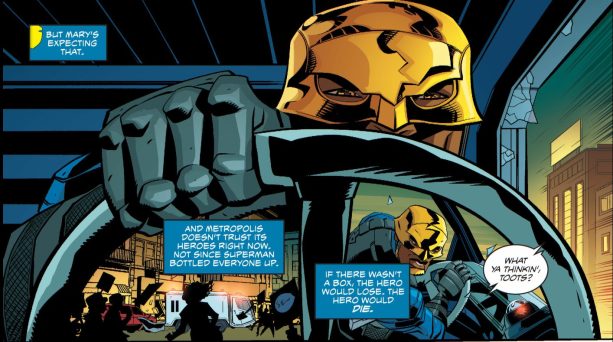 Sometimes an idea is good enough it can make up for execution that is not pitch-perfect. Using the steering wheel as a divider between panels is a clever idea. I just wish the panels chosen did more with that idea. Especially the right panel that does not do more than give you a different perspective of what you are already seeing. Having fewer pages to tell a story can push you to do things like this. Finding inventive ways to convey a lot of information with limited space. 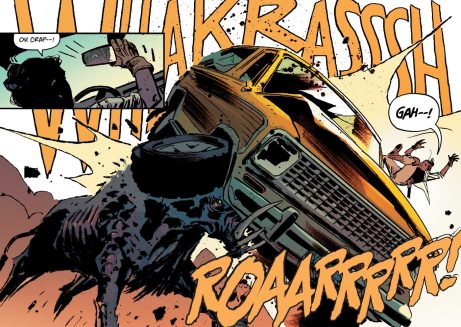 Big week for boars huh? Love that about comics. When you have so many books coming out each week you get random connecting points that come out of nowhere. This week it’s boars. Next week? We’ll see. What standouts in this panel is the use of sound effects. They dominate the page like they are aiding in the force of this collusion. If there is a downside it would be that the top left panel does get a bit lost in all the chaos. The action engulfs the page so much your eye can completely overlook it. Despite that quibble, it is still an effective moment.

Future State: The Next Batman #1 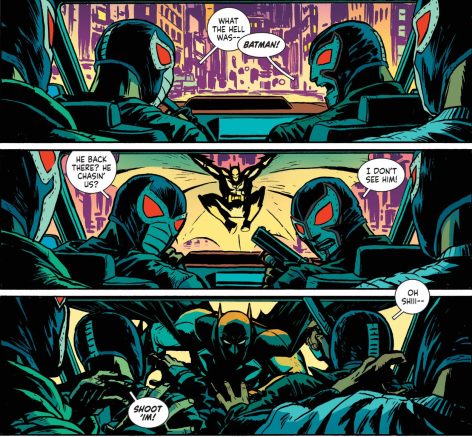 If you are going to get a new Batman over you are going to need to give him Batman moments. This is a Batman moment. The grace, the lack of fear, the disregard for his own safety to take down a group of faceless goons. That all fits the Batman persona no matter who is under the Cape and Cowl. I only took part of the entire page but these three beats have great pacing. You set the scene, have the surprise, and then comes the action. A very cinematic type of sequence. 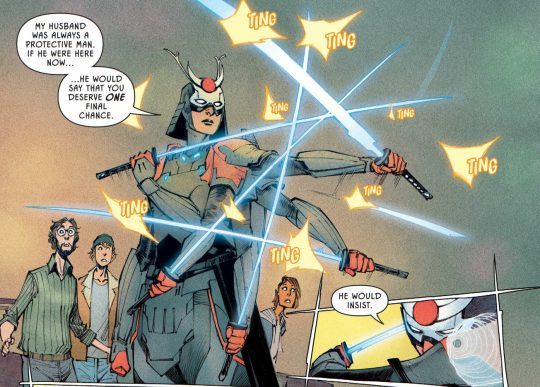 I love how this image has this false sense of motion. It is like looking at a static animated cell that is actually moving if you pay close enough attention. Those yellow sparks with the accompanying TING is what makes this all work. Part of me wishes her right arm was doing a bit more than just laying there stiff. However, the benefit is it makes this look a bit effortless. Is she stopping bullets or swatting away annoying flies? Maybe a bit of both.

Perhaps it is because of my admiration for things like the corridor fight scene in Old Boy, but I really love when we get a page like this done right. The key is making the flow easy to follow and moments within each part that stand out. The coloring here helps as well. The yellow, red, and greenish backgrounds help differentiate each beat. Having a glowing sword highlights all the slicing and dicing as well. This is only part of the page as I did not want to ruin the entire thing. It does give you enough sense of how generally the sequence played out. 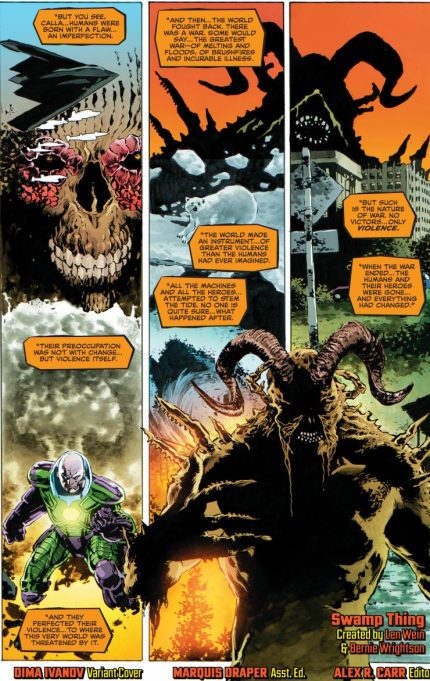 With the Venom panel above I mentioned how that started off the issue with a major impact. Future State: Swamp Thing #1 started off similar but in a different way. Here the impact was not one of action but of storytelling. I choose to highlight the second grouping of panels that ends the sequence instead of including the entire page. I find those images of horned Swamp Thing like creating quite fascinating. Is that the guardian of the green we all know or something far darker? Mainly though I was impressed by how the entire new status quo was built in one page. Sure there is some verbose dialog there but you can remove it and still get the essentials of what has occurred. A lot of heavy lifting before you turn more than one page. 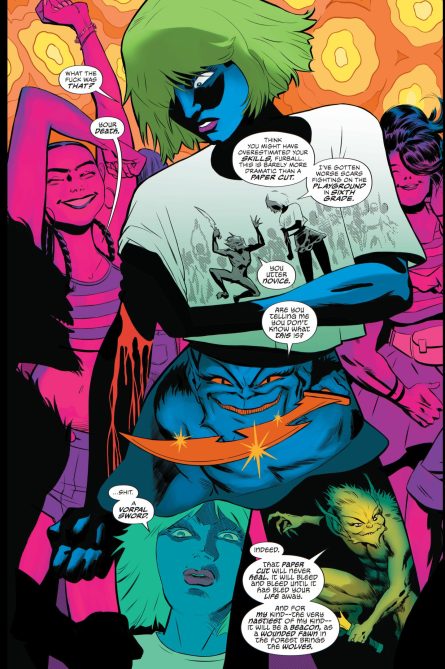 So I have to admit this is a massive cheat. This article is about the best panels and this is an entire page. I tried to just take a section or two but it ruined the entire effect of why this stands out. Artist Javier Rodriguez has been perfecting this storytelling technique for years now. Clearly, he loves to find ways to organically utilize paneling inside images. Being inventive is one thing. Having the skills and knowhow to execute on that invention is another.

Without proper color choices, this would not work. Having that neon pink in the background causes her white shirt to pop and grab your attention. Negative space is also key to separating each select moment. Lastly, you have to commend letterer Simon Bowland for finding a way to keep your eye moving without interfering with the ingenuity of the image. Not an easy task when you are trying to place important pieces of dialog onto a person’s body. Not your typical day of the office for sure. If you admire this page as much as I do I would heavily recommend picking up this issue. This was just one of the few pages that had this level of craftsmanship.