Transformers Robots in Disguise the new Animated Comic is finally here. Take a look at my Spoiler Free review of issue #2!

OK when I saw the subscription cover to this issue, shown above…. The first thing I thought was Bumblebee in a loin cloth screaming “I HAVE THE POWER”!! And if none of you get that reference then you all lose geek points!!  So we have a Roll Call page here. I told writer Georgia Ball on Twitter that when i read it the voice of R Lee Ermey, the drill sergeant from Full Metal Jacket went through my head! I now can’t wait to read each Roll Call page in all future issues!

Ball’s writing style is FUN. That’s really the take away for this series. TO HAVE FUN reading it. I was not expecting “Team Prime” to show up in the second issue. I mean I knew they were around after the events of issue #1, but I was half expecting Ms. Ball to hold onto that reveal card. Honestly though, I’m glad she pulled the Rip Cord on showing “Team Prime” right away. Because too much back and forth sneaking around between the two teams wouldn’t have been fun. The fun begins when a bus becomes a Decepticon! Have we EVER had a Public Transportation Bus as a Transformer… let alone a Decepticon??? That was just hilarious!!!

(UT OH side note thanks to Brian Kilby of Radio Free Cybertron helped me find out about the busformers….) 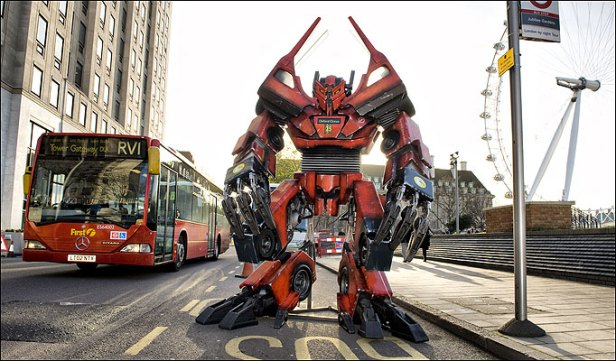 Sadly there was a busformer before now, but honestly Decepticon Transit is much cooler I think. What I’m loving about this series so far is that Georgia really fits the comedy into the plots so well. Grimlock as a GPS would be milk spewing out of your nose funny! The plot here is that Team Prime shows up, and somewhat requires Team Bee’s help in apprehending a Decepticon named Clipshade. The whole plot here is very G1 esque. Especially how they go about finding Clipshade, and what Strong Arm has to do to get in good with Cons. Georgia gives us great interactions between the two teams, and the Decepticons are funny as hell. The interrogation scene was cool to see, and it reminded me of Where in the World is Carmen Sandiego. The interesting bit in this issue is how she writes the serious angles of the story. Something is going on with Team Prime, and I am ready to know what it is now!!!! Strong Arm fangirling all over Arcee was cute, but it seemed a bit out of character. I could be wrong, but I just don’t see her dropping her super serious cop attitude as fast as she does in this issue. That’s really my only nitpick with the writing.

Tramontano’s art is just kick ass in this issue. I didn’t grab an image of this, but when Arcee and Bulkhead transform … the blur lines are just amazing!!!! All the backgrounds are well done, and her colors are wonderfully bright. Even on Team Prime…. the characters almost pop off the page! I really dig the interrogation scene with the three Cons in the stasis pods. Very cool expressions on their faces. Seeing a transforming Bumblebee as a top view was a really cool angle to show him in. I gotta say though Transit really is my favorite Decepticon design here. Tramontano really has knocked the art of this series outta the park!

Overall issue #2 of Transformers RID Animated was FUN, that’s the entire message I get out of this new series. To sit back read the book and HAVE FUN! Yet it seems that there’s more to the story with Team Prime… as I’ve said. Now I wonder how much of that story we’ll get… and if Windblade will ever show up? Other than that looking forward to issue #3 and seeing where the story goes! You can get Transformers Robots in Disguise #1 from Comixology digitally or any of your local comic shops!

Transformers Robots in Disguise #2 is a wonderfully FUN read. It's not just a book for kids, even though that's the target audience. It has something for all Transformers fans, and we are only two issues in!!!