One month down. Eleven more to go. Looking back at the month of January we had a solid month of books. Now February looks to keep that streak going. 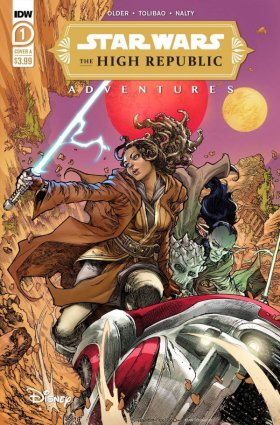 Description: Flaming destruction is coming to Trymant IV! A remnant of the Hyperspace Disaster appears in the sky, and Zeen and her best friend Krix have only minutes to get to the Elders of the Path and find safety! Meanwhile, Master Yoda, Master Baro, and a group of Padawans are racing towards the disaster for a daring rescue mission.

Why it Made the List: This is a big week of Star Wars comics with four books coming out. For those that do not know The High Republic is a new era in Star Wars that kicked off this year. I just recently finished the first novel and greatly enjoyed the direction it took. Less than a month old and this era is being filled out quite well. Now another new series that is geared towards the younger age. Another chance to get some new characters within the Star Wars universe. For a long time fans know this also includes Yoda as a teacher of padawans. Yoda the teacher is always a joy. 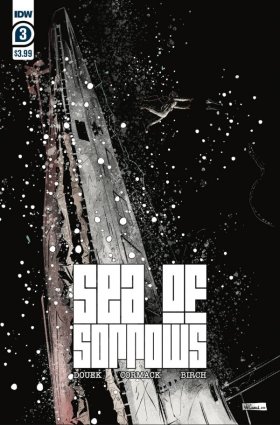 Description: Battle lines are drawn aboard the SS Vagabond, as the disappearances of more crew members drive the paranoid survivors against each other. The gold they came to salvage is mere fathoms beneath their feet, but is any fortune worth the price of their lives?

Why it Made the List: I have really enjoyed the partnership between Rich Douek and Alex Cormack. Previously they worked on the Road of Bones series and now Sea of Sorrows. What stands out is the use of black that dominates so many pages. It is like you are living in this forever nightmare where danger is the norm even if you cannot fully see it. Placing this story in the depths of a haunted sea is perfect for that type of craftsmanship. Each book they have done so far has had this distinct sense of place where the characters feel attached to the environment.  Their comfort is used against them as the conditions push them both physically and mentally. 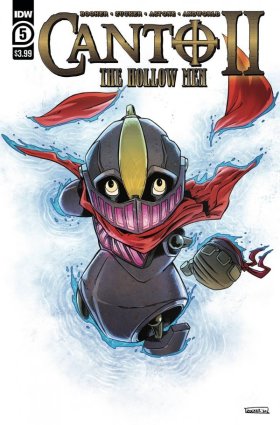 Description: Canto’s epic second adventure concludes! Canto has entered the Valley of the Lionhearted and learned he can only lift the Shrouded Man’s curse by sacrificing his own clock. In doing so, he could gain the power to finally defeat the Shrouded Man and free everyone in the Unnamed World. Will Canto give up his own time to become the hero his people believe him to be?

Why it Made the List: Canto II: The Hallow Men sees its second major arc come to an end this week. Canto has been one hell of a journey full of the type of adventures and characters you want to see in fantasy. This is one of those stories I find myself going through every emotion. One moment I am shedding a tear and the next my joy levels are at their fullest. Each character has been fantastically designed from the inside out to make this world full. For those thinking this is a simple, all-ages book know that is not the case. It is pure storytelling the way any fan would appreciate. Happy to know this is only the end for now. 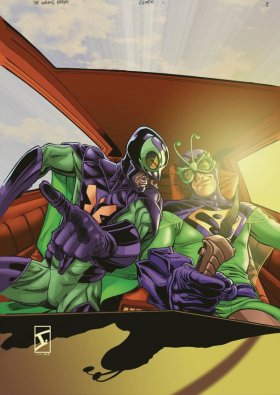 Why it Made the List: Comic fans often will debate what era was the best for comics. Some will prefer the darker tones while there are others who prefer the more Silver Age goofiness. The Wrong Earth has shown how both can coexist and have their own merits. What is exciting about this issue is we will most likely see the meetup between Dragonfly and Dragonflyman. They are set to team up in this new third world. How will they coexist? Imagine placing Adam West into the middle of the Dark Knight? We get to see what something like that would look like. 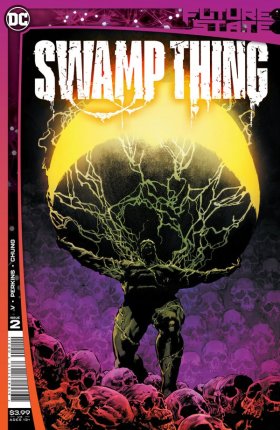 Description: Humanity strikes back! The shadow of Swamp Thing Supreme stretches across the globe as it has for centuries. The world is at peace, until a rebellious faction of humanity ignites their terrible plan, fueled by Woodrue Wilson’s appetite for power. But Swamp Thing, too, harbors a secret—one he must reveal in order to restore peace to the planet once again. But it will cost him everything he has.

Why it Made the List: This week my two favorite Future State books return. This being as good as it was is no surprise considering the creative team. Ram V and Mike Perkins have taken the baggage of the legacy of Swamp Thing and have used it to their advantage. Taking what people expect with this title and twisting it a bit for something new. Ironically as humanity has seemingly disappeared Swamp Thing is no longer focused on bringing back the green. He misses an aspect of humanity, but is he soon to realize they are now more dangerous than ever? We shall see. 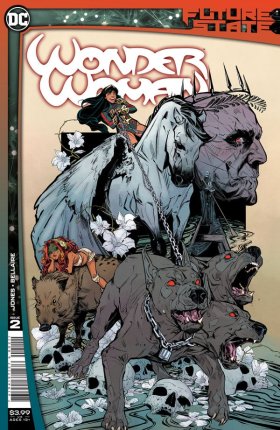 Description: Emerging from the Amazon rain forest, the new Wonder Woman must battle her way through hell! Witness Yara Flor at the height of her power as she takes on the king of the underworld, Hades himself! Betrayed by a close ally, Yara’s back is against the wall as she is forced to battle legions of demons for survival and to liberate her Themysciran sister. You won’t want to miss the exciting conclusion of this of rising superstar hero’s first adventure!

Why it Made the List: Yara Flor has been the character of 2021 so far. In the first issue, we saw just a glimpse of her personality and adventuress style. This book just feels different from everything else that DC is putting out right now. Perhaps it helps that Joëlle Jones is both writing and drawing so she can infuse her own unique style. Also, have to call out Jordie Bellaire who is one of today’s best colorists. She and Jones work magic together. If there was one comic in Future State that could expand the audience of DC it is this one. 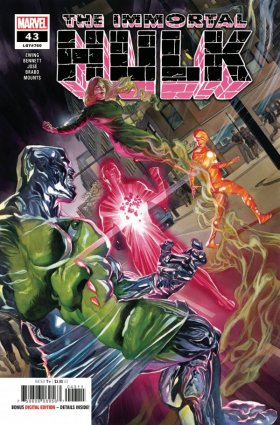 Description: New York City holds eight million people…and harbors one monster. A creature of chaos and anarchy, driven by rage and contempt for the structures of man. His criminal activities continue even while the beast is hidden in the skin of an ordinary human. But don’t be afraid, citizens. This radioactive disease has a cure. The U-FOES are here…and they’re going to kill the HULK.

Why it Made the List: By this point, I am tempted to just say, “It’s The Immortal Hulk either by now you know why you should be anticipating this book or you checked out long ago”. I do know many felt the direction after issue twenty-five was a bit of a strange one. Where some of the horror tones died down a bit. Now as the third act is closing you can see why. All these threads and ideas that have existed prior to this book’s debut are crashing together. Joe Bennett also appears to be back for this issue and that is when Immortal Hulk is at its best. 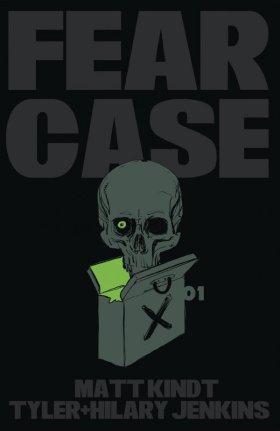 Description: A new, horrific detective series by Matt Kindt (Ether, Mind MGMT) and Tyler Jenkins (Grass Kings)! A no-nonsense Secret Service agent and his new-age partner investigate a mysterious box known as the “Fear Case,” which has appeared throughout history at sites of disaster and tragedy. Whoever comes into possession of this case must pass it on within three days or face deadly consequences. The agents must track down this Fear Case while staying one step ahead of a psychotic cult and the otherwordly forces behind the Case’s existence.

Why it Made the List: Another personal favorite creative team of mine is coming out with a new series. After Grass Kings and Black Badge, I will read whatever they do together. Also in Black Badge Hilary Jenks began coloring Tyler Jenkins art and I thought it brought it to an entirely new level. Characters were more well defined and she has a knack for pushing your eye to what is important. Fear Case is another unique concept that may have a potential horror vibe. Something that would differentiate this from their other books. Reading the description it is almost like their take on X-Files meets The Ring. All that sounds fun. 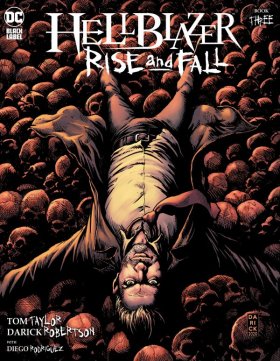 Why it Made the List: If you saw my Top 100 comics list you saw that Hellblazer: John Constantine was my favorite book of the year. I am still sad to see that book go but happy this series still has one more issue. This series is a bit different as it leans more on its sense of humor. Tom Taylor showing he has some Garth Enis in him with how twisted things have become. When you have the literal devil as one of your major characters, and he is actually quite well rounded as a person/being something is working right. Plus you have Darick Roberston reminding us why he is such a legendary artist. I am glad DC is recognizing the gift they have in John Constantine as a character and hopefully more quality comics are still in the near future. 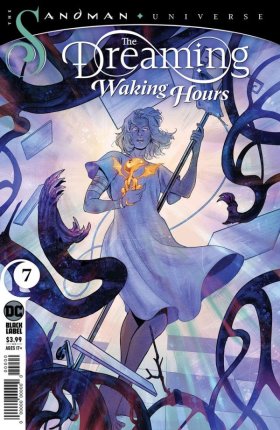 Description: Bleeding out in a hospital bed from a magic wound that will not heal, sorceress Heather After must swing open the gates of reality to find herself a protector…but is she prepared for the deal she’ll have to strike once she finds a champion with the dangerous power she needs? And speaking of dangerous power…what happens when Matthew the Raven catches a glimpse of one of the artifacts Heather’s been hiding away?

Why it Made the List: The Dreaming: Waking Hours #6 is one of my favorite single issues of the year thus far so how could I not put this at number one? Shakespeare meets The Sandman universe all drawn by the massively creative Javier Rodriguez. If you have not read this series yet this is actually a great time to jump on. In the last issue, we saw a shift to this new arc that has so much promise. I am a heathen when it comes to understanding Shakespeare but even I can appreciate the use of Puck in this book. Comics are a medium where anything is possible. It’s great reading books that try to live up to that moniker.

71 - Ferb Latin With The Remains Of The Platypus!!!